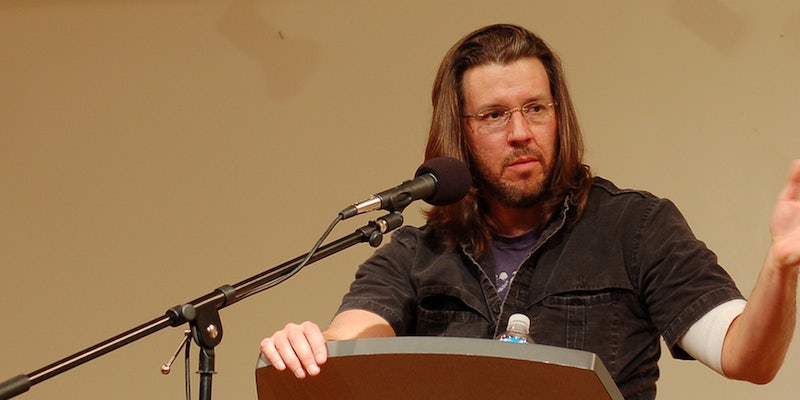 Sorry, Internet, but this is not David Foster Wallace’s annotated ‘Ulysses’

Since his suicide in 2008, the life, work, and above all literary marginalia of author David Foster Wallace has acquired a saintly glow, inspiring mindless worship—especially online. At this point, you could attribute just about anything to the guy and have dozens of supposed fans chime in about his brilliance. So New York novelist James Boice did.

David Foster Wallace’s marked up copy of Ulysses by James Joyce. Found this on a curb in Cambridge, MA. https://t.co/0uBIVQzTPj

The artifact is surely attractive, and it’s a sound bet that Wallace managed a close reading of Joyce’s modernist masterpiece at some point, meaning Boice’s image was dutifully retweeted with comments like “I need to reexamine if I have ever truly READ a book” and “Amazing to see yet seems so personal.” On Tumblr, it was liked and reblogged thousands of times, even by the seasoned book experts at Housing Works and McNally Jackson.

But if you squint, the fiction falls apart:

A quick glance at the page layout in Sever’s Robert Mitchum: “Baby I Don’t Care” on Google Books readily confirms this claim—and at nearly 600 pages, the tome is just hefty enough to pass for the notoriously thick Ulysses (provided you don’t look at the text).

Boice enjoyed the public’s eagerness to gush, retweeting anyone who thought they had gotten a glimpse into Wallace’s much-examined headspace. Then he copped to his prank.

(This Is Not) David Foster Wallace’s Annotated Copy of Ulysses https://t.co/bQzyKZ3LkF via @biblioklept

We reached out to Boice with hopes of learning what inspired this bibliophilic mischief, which seemed to separate wannabe Wallace-ites from smarter skeptics, and will update if we hear back. Meanwhile, if you’re curious about DFW’s actual scribblings, you can visit an archive of his papers at the University of Texas’s Harry Ransom Center or check out the Whitney Museum’s 2014 Biennial, which features some of his journals.

Photo by Steve Rhodes/Flickr (CC BY 2.0)