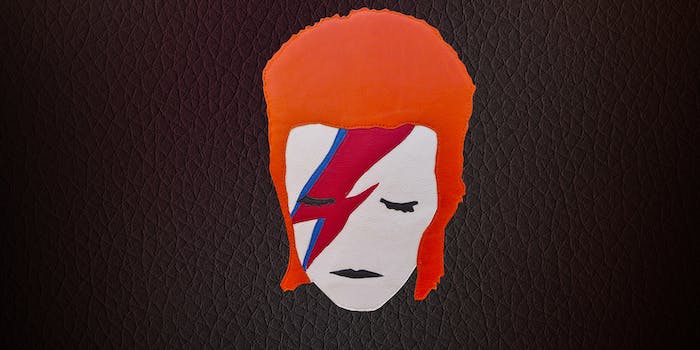 Ziggy Stardust will have an eternal home in the stars—near Mars, of course.

A new constellation has been named in honor of Earth’s favorite star man.

The Belgian radio station Studio Brussel and the public astronomy observatory MIRA have teamed up to register seven stars—appropriately located near Mars—as a unique celestial constellation in memory of singer David Bowie, who passed away on Jan. 10.

Playing connect-the-dots with the seven stars yields the shape of a lightning bolt—an homage to the one that streaks across Bowie’s face on the iconic cover of his 1973 album Aladdin Sane.

Studio Brussel and MIRA mapped the stars on a special Google Sky website, Stardust For Bowie, that allows fans of Bowie’s cosmic music to click inside the “lines” of the lightning-bolt constellation and add their favorite Bowie songs. Fans can also posts tributes and reflections on what Bowie’s songs meant to them.

In a press release, Studio Brussels noted that the inspiration for choosing these particular seven stars came straight from Ziggy Stardust himself.

Studio Brussels wanted to give David Bowie a fitting tribute: an own constellation. Along with public observatory MIRA, Studio Brussel registered seven stars in the form of Bowie’s iconic thunderbolt. Bowie takes on a symbolic place alongside the 88 existing constellations. “It was not easy to determine the appropriate stars,” says Philippe Mollet from MIRA. “Studio Brussels asked us to give Bowie a unique place in the galaxy. Referring to his various albums, we chose seven stars – Sigma Librae, Spica, Alpha Virginis, Zeta Centauri, SAA 204 132, and the Beta Sigma Octantis Trianguli Australis – in the vicinity of Mars. The constellation is a copy of the iconic Bowie lightning and was recorded at the exact time of his death.

On the Stardust for Bowie website, fans filled in the lightning bolt with tributes to the rocker’s hundreds of songs.

After choosing her favorite Bowie song, “Let’s Dance,” a fan named Dawn Resch wrote, “David Bowie was as important to the human race as is space exploration. This is a wonderful project. Thank you.”