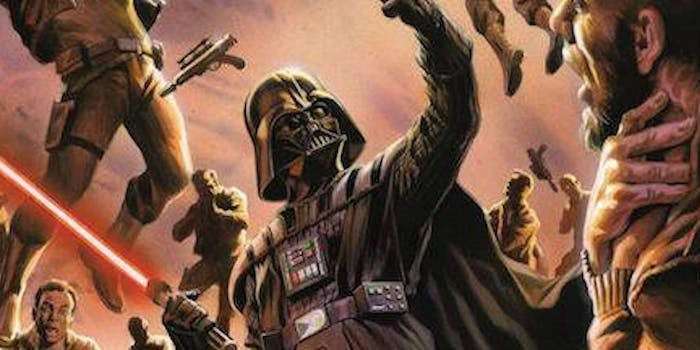 You can save on all of Dark Horse's Star Wars comics until Jan. 1.

Ringing in the new year brings fresh starts as well as sorrowful partings. For the comic book community, this week will mark a historic end.

After more than 20 years of publishing Star Wars comics, Dark Horse Comics will lose the franchise license to Disney’s Marvel on Thursday.

While we’ve known this day would come, it doesn’t make it any less bittersweet. To commemorate the end of its reign, Dark Horse has decided to hold a massive Star Wars farewell digital sale. You can purchase individual Star Wars comics for 50 percent off or buy a megabundle for only $300 that includes every single Star Wars comic Dark Horse has published since 1991.

“The end of an era closes. We say a fond farewell to Star Wars. The wookiees will be missed and bounty hunters will be sad. But take heart young Jedi, for these last few days you can seal in carbonite the entire Dark Horse digital library of Star Wars,” the description reads. “Get every comic, every panel, every battle in perfect digital format in your collection. Access via the cloud city when ever you want. Many of these comics may never see the force again, or print.”

Marvel has done a great job of teasing its upcoming Star Wars comics and we’re impressed by what we’ve seen so far, but it’s still sad to say goodbye to Dark Horse. While Marvel announced it would reprint some of Dark Horse’s comics in a Star Wars Legends Epic Collection as well, there’s no way to know which ones will be reissued. If you have any particular favorites or a comic you’ve been meaning to try, this sale is the perfect time to pick up a digital copy.