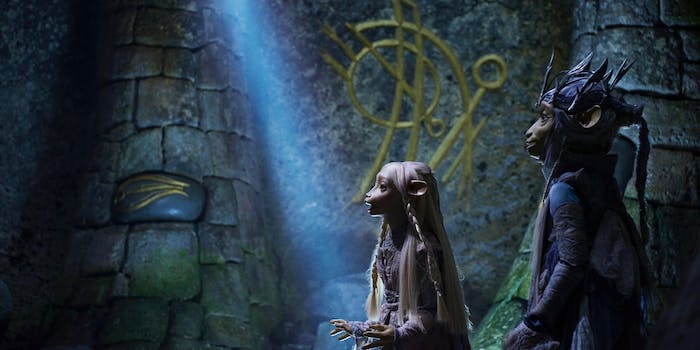 Special features video for ‘The Dark Crystal: Age of Resistance’ showcases the puppetry

Netflix released an extended behind-the-scenes video for The Dark Crystal: Age of Resistance at San Diego Comic-Con, giving fans more insight than ever before into what it took to create the show.

The crew behind the show have been open about the importance of using practical effects versus CGI, and in the video, you can catch a glimpse of what that looks like in action. Some of the scenes contain both, but the difference is where they’re used: in some instances, only the background is computer-generated; the characters were all built and performed.

“The amount of craft that goes into the making of the puppets, the artistry that goes into those creatures, and then the guys who operate them,” Taron Egerton, who voices Rian, said during Age of Resistance‘s Comic-Con panel. “We arrive and it’s there. It’s inspiring in itself, the work that everyone else has done kind of feeds your performance.”

Jim Henson and Frank Oz’s The Dark Crystal was a groundbreaking achievement when it was released in 1982. In the time since the film’s release, it has since spawned spinoff books, board games, graphic novels, and other tie-ins. The only thing it hasn’t done is film an expansion of the story—until now.

Netflix is finally bringing The Dark Crystal back with a prequel series. Titled The Dark Crystal: Age of Resistance, this 10-episode fantasy adventure series will take fans back to the world of muppet-y monsters. Let’s take a look at what we know so far about this hugely anticipated project.

Details on the plot for the upcoming project are sparse, though we know it’s a prequel taking place many years before the events of the film. Here’s how Netflix described it in a press release announcing the project:

“The Dark Crystal: Age of Resistance returns to the world of Thra with an all-new adventure. When three Gelfling discover the horrifying secret behind the Skeksis’ power, they set out on an epic journey to ignite the fires of rebellion and save their world.”

In the original film, the Gelfling are a race of elf-like creatures native to the world Thra, while the Skeksis—large vulture-like creatures—are their antagonists. No word yet on whether the adorable dog-like creature Fizzgig (or one of his kind) will show up, but we’ve got our fingers crossed.

Netflix first unveiled the all-star cast for The Dark Crystal: Age of Resistance in December 2018, which contained familiar voices and names from some of the world’s biggest franchises.

Taron Egerton (Kingsman, Rocketman), Anya Taylor Joy (The Witch), and Nathalie Emmanuel (Game of Thrones) will voice the three Gelfling heroes at the center of The Dark Crystal: Age of Resistance. Their characters are named Rian, Brea, and Deet, respectively.

Donna Kimball will voice Aughra, a character originally voiced by Billie Whitelaw in the Dark Crystal film. Puppeteers Alice Dinnean, Louise Gold, Neil Sterenberg, and Victor Yerrid will voice additional characters, although Yerrid is the only puppeteer who has a character with a name (Hup).

Netflix announced the Dark Crystal series on May 18, 2017, naming Louis Leterrier (Now You See Me) as the series’ executive producer and director.

Leterrier gave a reassuringly heartfelt statement about the project.

“As a filmmaker, one of my earliest influences was Jim Henson’s masterpiece ‘The Dark Crystal,’ a movie that brought to life a universe rich in detail and teeming with incredible characters. The creativity in the film was limitless and groundbreaking for that time, restricted only by the special effects tools of its day. As I envision ‘Age of Resistance,’ I am most excited about joining today’s film techniques with the practical visual effects that are such an integral part of The Dark Crystal – the artistry, the craftsmanship, the performances, and of course the puppets! It is a gift and an honor to work alongside the teams at The Jim Henson Company and Netflix, the artists at Jim Henson’s Creature Shop, and the Frouds, as we begin this new adventure, diving deeper into the world of Thra and working hard to bring fans all they have hoped for.”

Fans of the classic movie will also be relieved to see Rita Peruggi, a longtime Henson collaborator, is attached to the project as a producer alongside The Jim Henson Company’s Blanca Lista. Jeffrey Addiss and Will Matthews (Life in a Year) will lead the writing team with Javier Grillo-Marxuach (Lost, The 100).

While a teaser released by Netflix leans into the real effects and puppetry that made the 1982 film so magical, the series will feature a mix of practical effects and CGI. Age of Resistance started filming in the United Kingdom in 2017.

At New York Comic Con in October 2018, Leterrier called The Dark Crystal: Age of Resistance “a work of love, a work of art,” and highlighted the practical effects of venturing back into the world that Henson created.

“We’re not using CGI on this one,” Leterrier said to applause from the crowd. “It’s puppets, man. Puppets!”

After months of hype, Netflix released the first trailer for The Dark Crystal: Age of Resistance.

The full extent of the puppetry in the show is on full display as we’re introduced to several of the Gelfling and Skeksis characters that we’ll follow throughout the first season. Although we’re shown Deet encountering a vision of what’s to come, the trailer is otherwise light on plot.

The 10-episode first season of The Dark Crystal: Age of Resistance will drop on Netflix Aug. 30.