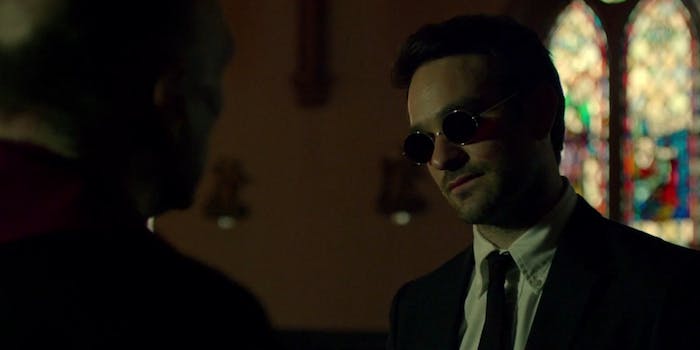 ‘Daredevil’ returns in a dark, violent trailer for season 2

In the new season of 'Daredevil,' the Punisher enters Hell's Kitchen in a hail of bullets and blood.

The second season of Daredevil arrives on March 18, and Netflix has just posted the first full-length trailer for the show’s return.

While season 1 was all about Matt Murdock’s origin story and the rise of mobster supervillain Wilson Fisk, season 2 introduces the Punisher (John Bernthal) as the new antagonist.

Unlike the two Punisher movies, which generally followed Frank Castle’s perspective as a troubled antihero, Daredevil‘s Punisher is framed as a dark, out-of-control alternative to the fiercely moral and perpetually guilt-ridden Matt Murdock. While Matt asks his priest for advice, Frank Castle unleashes a hail of bullets on the criminals of Hell’s Kitchen.

Also, let’s not forget the first—albeit brief—appearance of Elodie Yung as Elektra, another familiar character for fans of the comics.

Plot-wise, this trailer is light on detail. We’ll undoubtedly find out more from the next trailer on Feb. 25, but for now, it looks like Netflix is emphasizing Daredevil‘s dark, gritty tone, and focusing on the brutal action sequences that got such a positive reception last season.