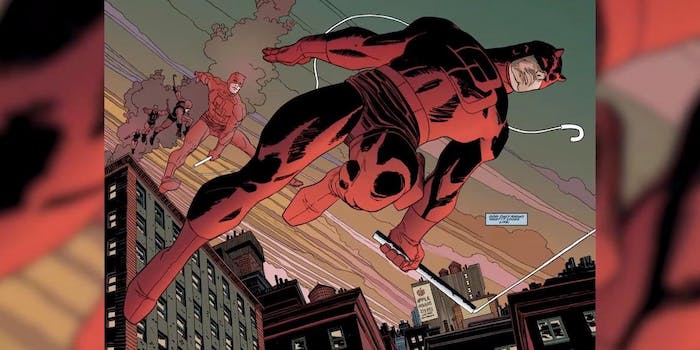 Ranking all 8 of Daredevil’s super suits

Daredevil has had a lot of costume changes over the years. Here's a look back.

On April 10, a mass of Marvel fans waited with bated breath as Netflix debuted its newest collaborative series, featuring The Man Without Fear, Daredevil.

As viewers gorged on the 13-episode series, it becomes clear that Matt Murdcock’s vigilante alter ego has a not so useful costume. (Stab wounds, anyone?) But in the series finale, viewers got a look at Daredevil’s new threads. They’re deliciously dark and utilitarian, making for a fierce new weapon in his arsenal to strike fear into the Hell Kitchen’s biggest baddies.

Daredevil has had varying looks over the past few decades—some great and some screaming “fashion victim” rather than protector. Here’s a look at some of his most iconic costumes rated on a 1-10 scale based on utility, sartorial savvy, and just plain cool factor. 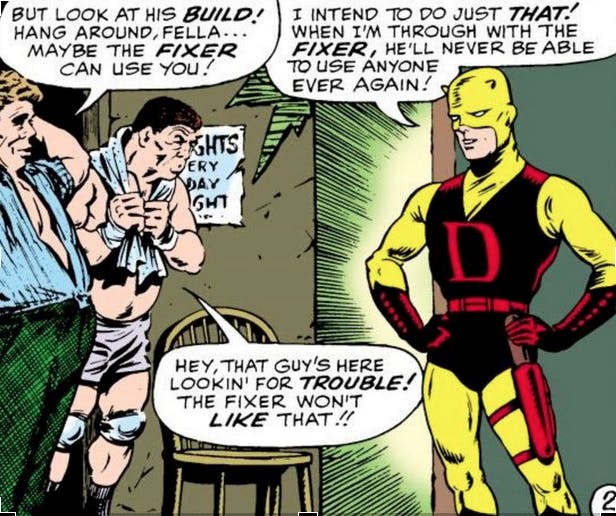 Created by comics legends Jack Kirby and Bill Everett, Daredevil’s first look paid homage to Matt Murdock’s boxing heritage. (The leotard is said to be made with the remains of his father Jack Murdock’s boxing robes.) The black unitard featured a single D, later to be changed in Issue No. 5 to the iconic overlapping double D’s. Paired with yellow tights and red script for dramatic flair, the look was topped off with a set of horns—as if the colors weren’t alarming enough.

Score: 5.5. Red and yellow aren’t the most stylish colors in the super hero repertoire, but it certainly made him memorable. 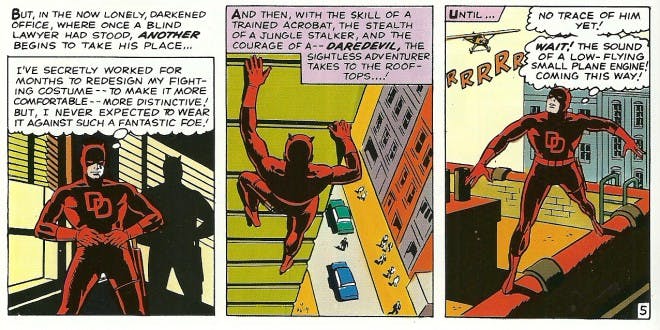 Wally Wood, responsible for Daredevil’s double D logo, advanced the costume, making it darker and synonymous with blood. This look is referred to as Daredevil’s signature “classic” costume as it became more distinctive and menacing to Daredevil’s foes.

Score: 9. There’s few heroes who can pull off a look composed of red spandex/leather. (I’m looking at you Elektra.) This look really is a classic. 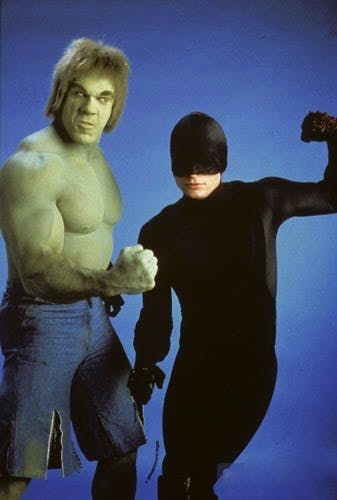 The made-for-TV movie Trial of The Incredible Hulk featured Matt Murdock as Bruce Banner’s defense attorney. While Murdock defended Bruce by day, he did his own investigative research by night in a black spandex suit. If you’re having a sense of deja vu, your eyes aren’t deceiving you. This is Daredevil’s “starter” look in the beginning of the Netflix series.

Score: 4. Plain old black seems a little boring for a superhero, but I get it. It’s indicative of the era following the espionage fiction of the Cold War. But Spandex doesn’t make for good protection against bullets, knives, or rooftop skirmishes. 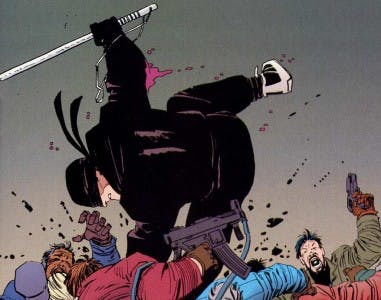 Score: 8. Some could argue that this comes off more burglar chic than start-up vigilante, but either way it’s a ’90s street-wear vibe that I can appreciate. Who doesn’t love sweat pants? 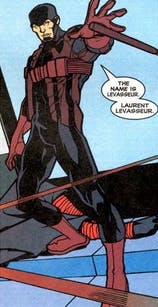 Daredevil is stripped of his memories and identity in order to carry out a S.H.I.E.L.D.-sanctioned mission in France. The only visible Daredevil trademark is the billy club holster, that’s been moved to his chest instead of its standard leg placement. Created by Scott Lobdell, Cully Hamner, and Jason Martin, the arc only lasted three issues.

Score: 4. French influence is typically seen as extravagant, at least as far as fashion and cuisine are concerned, but this look is anything but. Sorry, Murdock. At least you can blame it on S.H.I.E.L.D. 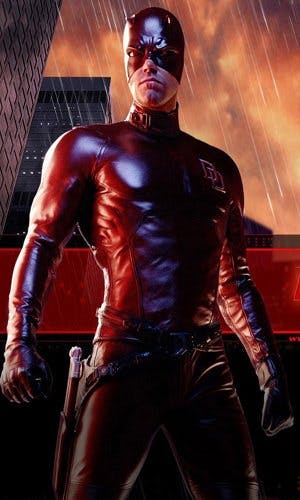 When the horned vigilante finally made his cinematic debut, costume designer James Acheson (known for his work on the Spider-Man films) attempted to take inspiration from the classic 1965 red look. In reality, the open collar and shiny red leather achieves more of a S&M fantasy vibe. But that was just one of many literal red flags in the film.

Score: 7. The suit looks more like latex than red leather, but it definitely held its own, more than we can say for the movie itself. 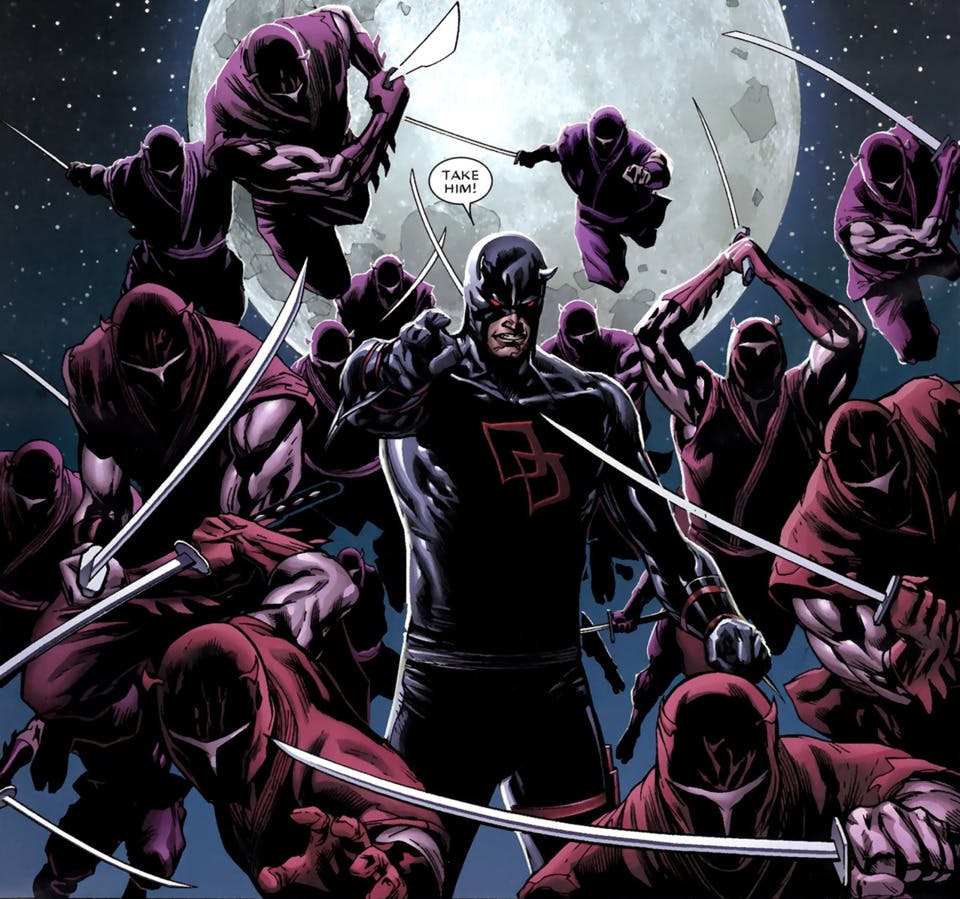 One of Daredevil’s most popular storylines sees Murdock take leadership of the occult ninja clan,The Hand. During his tenure, he is possessed by the Beast of The Hand demon and transforms Hell Kitchen into a no-holds-barred prison called Shadowland. During the possession, Murdock inverts his suit colors to predominantly black. It takes the might of Spider-Man and the Defenders to shut him down.

Score: 10. The look is pretty befitting a possessed ninja vigilante turned crime-lord. But the best part? The retractable blades on his elbows. 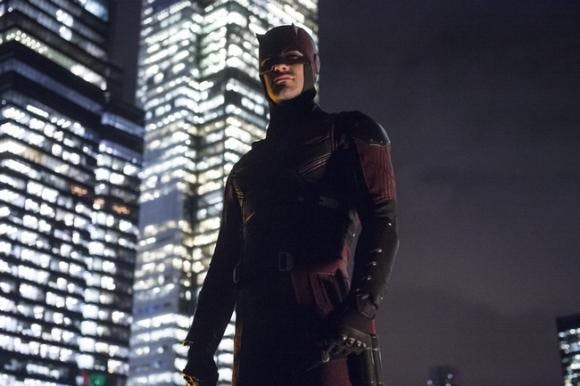 Leave it to Marvel to bring home the prodigal son after 2003’s stint at the box office. Back and ready for fan consumption, Murdock dons his red specs by day and our favorite black spandex by night. But there’s a red light at the end of the tunnel as we get to see Daredevil armored up in his new scarlet duds.

Score: 10. Is an explanation necessary?