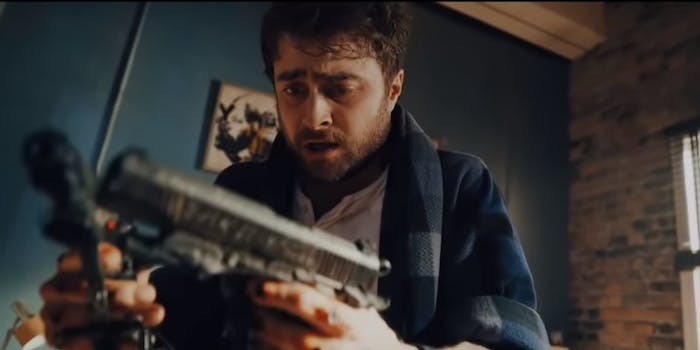 You may already have seen photos from Daniel Radcliffe‘s upcoming movie Guns Akimbo, because there’s something very obviously memeable about the former Harry Potter star wearing a bathrobe and giant slippers while manically waving a pair of guns. Those pictures have been floating around since 2018, but now we finally have an actual trailer to watch.

Written and directed by Jason Lei Howden, a filmmaker whose last movie was called Deathgasm, this is very clearly a B-movie. Daniel Radcliffe has made a pretty wide range of projects since finishing Harry Potter, so it’s actually not a huge surprise to see him doing something like this between starring in a religious sitcom with Steve Buscemi, and filming a historical prison-escape drama. Guns Akimbo is a quirky action-comedy with obvious video game influences, starring Radcliffe as a slacker who has to fight for his life in an urban death-match, forced into action by a sadistic online fight club.

The general vibe here is like Escape from New York crossed with one of those slightly obnoxious nerd movies where a dweeby gamer gets paired up with an unfeasibly hot, competent woman. In this case, that’s horror star Samara Weaving (Ready or Not), who plays a champion gladiator called Nix. When Radcliffe’s character gets tapped to participate in a livestreamed fight to the death, Nix is the one he has to avoid. But things get even more complicated when (wouldn’t you know it!) his ex-girlfriend gets kidnapped.

Does this movie look silly? Yes, for sure. But the combination of gory action, genre-savvy humor, and a weird Daniel Radcliffe role will definitely find an audience, especially once the film arrives on streaming services.