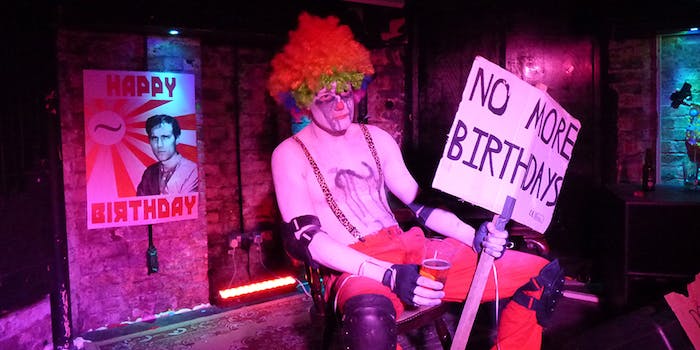 How a spiraling, dystopian birthday joke on Twitter turned into a book deal

Daniel Barker's Birthday lasted for 75 days, and ended with him as the dictator of a birthday-obsessed dystopia.

Back in January, Daniel Barker had a harmless complaint to share with his Twitter followers: not enough people were celebrating his birthday.

Eight months later, this one tweet has led to a surreal and occasionally horrifying Twitter narrative, a party full of creepy clowns and leopard cosplayers, and a book deal. (The book deal went to someone else, though. Yet another blow to Barker’s ego.)

In response to that fateful tweet, Barker’s friend @FrogCroakley decided to do him a solid and wish him a happy birthday. Every day. For 75 days in a row.

As the days wore on, the birthday tweets became increasingly bizarre and less relevant to Barker’s actual birthday. A story began to take shape, and it wasn’t a pleasant one.

Hunched workers hurriedly don party hats as they pass police checkpoints; @daniel_barker glowers from behind a cake on titanic billboards.

200 emaciated clowns toil at a vast capstan, clanking as it hauls a banner reading "HAPPY BIRTHDAY @daniel_barker " over all of East London.

“It sort of took on a life of its own and became me telling weird stories about his birthday,” FrogCroakley, who is now going by the pseudonym Nate Crowley, told the Daily Dot at Nine Worlds convention last weekend. He was there to head up a panel about the birthday tweet saga. “Eventually [it became] about a planet devoted to nothing but the celebration of his birthday.”

Sat on a marble throne, @daniel_barker frowns. The Scottish delegation's birthday offering is poor; they will be ushered into The Microwave.

“I think people got really irritated around the seventh day of wishing him a happy birthday. But… the longer and longer it went past being a sensible time for the joke to have lasted, the more people got into it. They got into like, making propaganda posters with Daniel’s face on, and submitting pictures and things.”

This goes out to anyone celebrating Daniel Barker's birthday. (anyone who isn't should probably start quite soon). pic.twitter.com/gbjQLxVIuO

The world depicted on Crowley’s Twitter feed was a hellish dystopia ruled by the birthday-obsessed Daniel Barker, a bloodthirsty tyrant whose every whim must be obeyed.

"Greetings!" shrieks @daniel_barker, gulping a mug of eagle blood as he capers down a spiral staircase in an icing-smeared general's uniform

"More guests! What a surprise!" croons @daniel_barker, as a lady in a faded ballgown begins openly weeping. "Shall we play musical chairs?"

It continued for weeks, growing more and more intricate with every new installment.

What's that? You'd like another peek at @daniel_barker's birthday book? Oh go on then. pic.twitter.com/a5ZHmCVIig

Buzzfeed discovered the Birthday around day 38, but Crowley was only halfway done. By this point his Twitter feed was almost exclusively birthday-related, and while it should have been too bizarre to make sense to outsiders, more and more strangers were beginning to pay attention. Daniel Barker’s birthday officially had its own fandom.

“Behold our flagship, the battlehome ‘many happy returns’” it whispers. The ship’s continent-sized prow bears a likeness of @daniel_barker.

Eventually, Crowley explained, “there was no way to de-escalate other than to have an actual physical party.” It was time for some closure.

THERE'S GOING TO BE A PARTY.

“When the party actually came to pass, we definitely only knew a minority of the people there. A lot of people came, often on their own, just to go to Daniel’s birthday party.” They arrived dressed as clowns, or leopards (which Crowley explained was “hard to contextualize” without reading the entire story), or members of the anti-birthday resistance.

“The crown of it was Daniel coming cosplaying as himself. He’s a terribly nice chap, a bit bemused and baffled by it a lot of the time, but he eventually developed a sort of Stockholm Syndrome and showed up in character as himself, because I’d written him as a monstrous tyrant, obsessed with everyone celebrating his birthday. He nailed it.”

After more than two months of birthday horror, Crowley finally drew things to a close. Incredibly, the two men remain friends. Even more incredibly, Daniel Barker’s Birthday landed Crowley a book deal with Abaddon Books, a British fantasy press. An editor at Abaddon had been following the Birthday online, and offered Crowley the chance to publish a novella.

“It’s wildly different in terms of subject material,” he told us, “but I suppose what I did with the birthday thing was a sprawling, bleak, weird setting that relentlessly escalated… I think all of those characteristics have been brought over to the story I’m writing for Abaddon.”

Published under his pseudonym, The Sea Hates A Coward comes out on Oct. 9. It isn’t about birthdays.

If you fancy reading my wossname, you can pre-order here – out via @abaddonbooks in October! https://t.co/JCZjkHr1Jw pic.twitter.com/NYTNakQfnC