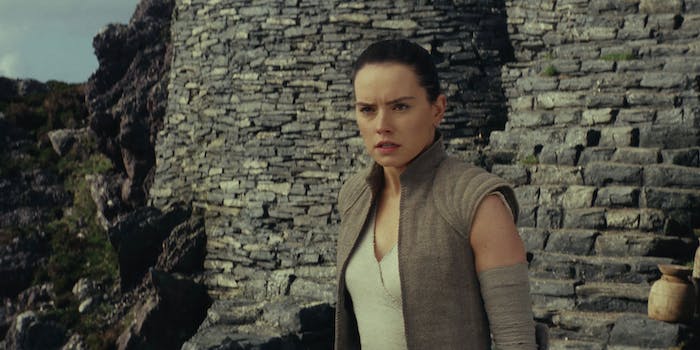 Daisy Ridley loves porgs as much as you do; Rey not so much

She has too much on her plate to be charmed by porgs.

Star Wars: The Last Jedi doesn’t come out for another month, but porgs are already one of the film’s breakout stars. Although they’re divisive among some Star Wars fans, porgs are cute and look cuddly and their screams can perfectly capture both pure joy and terror. Unfortunately, one of the movie’s heroes isn’t as fond of them as we seem to be.

In an interview with USA Today, Daisy Ridley—whose character starts The Last Jedi on the same planet that the porgs inhabit—says that Rey isn’t all that enamored with the porgs. It’s not that Rey has a negative opinion of porgs but rather she’s got too much on her plate to give them much thought.

“Rey, honestly, is too wrapped up in her own journey to pay attention to porgs,” Ridley explained. “Which is a sad thing.”

It makes sense, really. The majority of the scenes we’ve seen with Rey so far have teamed her up with Luke and show her in the thick of Jedi training. She might have some down time on Ahch-To, but hanging out with porgs and porglets probably don’t appear very high on her list.

Chewbacca, on the other hand…

Luckily, Rey’s apparent indifference toward porgs hasn’t affected Ridley at all. Using the words “hilarious” and “adorable” to describe them, Ridley said that porgs were “bringing a lot of pleasure right now.” And she even got to shoot with porgs, which involved porg puppets.

“It’s wonderful to be working around practical things on set that have such personality,” she said.