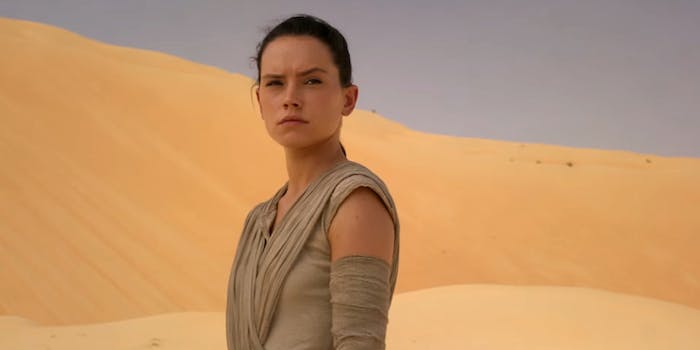 She saw a vulnerable character in Rey.

Star Wars: The Force Awakens was loved by fans and critics alike and became one of the highest-grossing films of all time, but upon its release some fans accused its heroine, Rey, of being too perfect. Now, the actress behind the mostly beloved character is opening up about the accusations that made her “confused.”

The controversy, which started nearly a year ago, came after complaints from some fans—screenwriter Max Landis among them—that Rey was a Mary Sue. They found her mechanical talent, her fluency, and how quickly she was strong with the Force somewhat unbelievable. The backlash to the Mary Sue accusations was swift as critics pointed to the sexist nature of a Mary Sue and how male characters who are perfect never face the kind of criticism that a female character does. (Not to mention a female character rarely gets to be as nuanced and complex as Rey.)

Chief among those examples was another Jedi who took down the Death Star with a little help from the Force: Luke Skywalker.

Daisy Ridley, who portrays Rey, appeared on MTV News’ Happy Sad Confused Podcast earlier this week and addressed those comments. She called the very idea of the Mary Sue sexist because “it’s the name of a woman” while pointing to critics’ examples of similar male characters. But she saw a vulnerable character in Rey and didn’t understand where the criticism was coming from.

“I think Rey is incredibly vulnerable, and nothing she’s doing is for the greater good,” she told MTV’s Josh Horowitz. “She’s just doing what she thinks is the right thing. And she doesn’t want to do some of it, but she feels compelled to do it. So for me, I was just confused.”

Star Wars: Episode VIII doesn’t come out until next year, but chances are it probably won’t change some fans’ opinions on whether Rey is too perfect. Other fans will be more than happy to see her again.