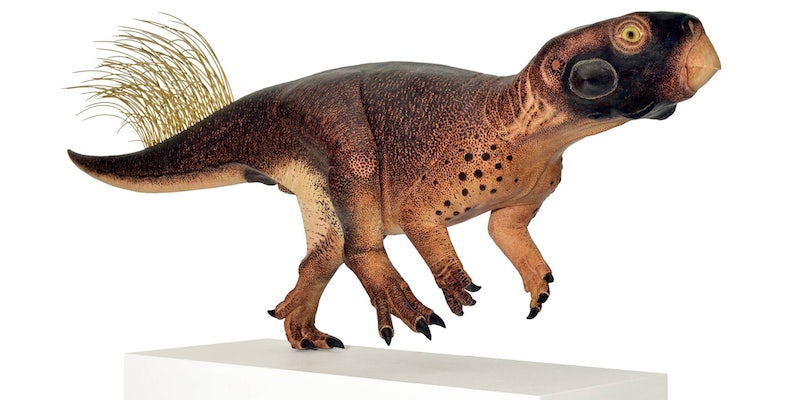 Scientists decode the color pattern of the world’s cutest dinosaur

Art and science merged to make the most accurate 3D model of a dinosaur yet. And what a dinosaur researchers chose.

The Psittacosaurus, or parrot lizard, lived over 100 million years ago, was the size of a turkey, and had the most adorable face we’ve ever seen on a dinosaur. But more importantly, its dark back and light underbelly tells us something important about how it lived.

Paleobiology artist Robert Nicholls created a 3D sculpture of the beast in a plain, grey color. Then he took photos of it outside in bright light, and in the diffuse light of a forest. Those images helped confirm the evidence of pigmentation found on the fossil, suggesting the animal was dark on its top side, with lighter coloration on its chest and backside. This dark top, light underside coloration is known as countershading, and it’s pretty ubiquitous in the animal kingdom. Think sharks, squirrels, or even your tuxedo cat with his white underbelly. When these types of animals are seen from the side, they’re harder to detect against a dark background, like that of a forest. But the light-colored chest and behind suggests that the animal may have lived beneath the forest canopy and walked on its hind legs. An animal seeing the parrot lizard from the front may mistake its light-colored chest and behind as light coming through the trees.

This is the first time scientists have found evidence of countershading in dinosaurs, according to the Guardian. And this study, published open access in Current Biology, will set a precedent for how artists imagine dinosaur coloration in future studies. It really just looks like it’s poking out from the underbrush, saying, “you rang?”