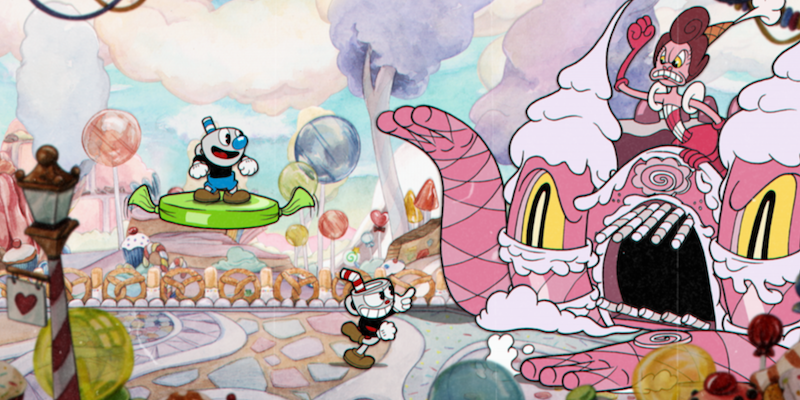 Cuphead is one of the year’s most charming, challenging games

Though this indie game looks like it was meant for kids, it requires a great deal of skill to master.

The first thought you’ll have about Cuphead is how stunning it looks. Indie developer StudioMDHR has fully committed to a 1930’s cartoon-inspired, hand-drawn art aesthetic for this title and it works perfectly. Bright, colorful characters and a whimsical jazzy soundtrack set the scene in every environment. It’s hard to look at the game in motion and feel unimpressed.

The second thought you’re likely to have about Cuphead is how unforgiving it can be. Enemies move quickly, change patterns, and will reveal new surprises meant to shock and frustrate. This is not an easy game. Despite that, an accessible learning curve makes sure that even an inexperienced player can learn to master the run-and-gun style gameplay with enough practice.

This animated adventure begins with the titular hero losing a bet to the devil, and learning that he’ll have to defeat a series of formidable foes in order to pay back the debt. Along with his brother Mugman, Cuphead sets out across a cutesy island populated by more cartoon characters, some who will help his journey, and others who only stand in the way.

There are two main varieties of missions you take on as the plucky heroes. Run-and-gun sections play like traditional platforming levels, as you advance and avoid foes hoping to eventually reach the end goal. Along the way, you grab hidden coins and gun down anything in your way to rack up the best score. You can lose one of your precious few lives by simply bumping into an oncoming enemy, making sure your reflexes are perfectly attuned to the challenge. In boss battles, Cuphead is dropped into the arena with the only goal of knocking out the imposing enemy before they do the same to him.

Enemies come from all directions of the screen, in action-heavy segments, making for chaotic and stressful runs. It is unlikely that you will be able to clear any of these segments on your first try, or even after a few. It benefits the player to keep moving forward, shooting constantly, and carefully considering when to use special moves like a dash or super. Studying the enemy’s animations, behaviors, and timing is the best way to get past a segment that has you stuck.

Like many games that pride themselves on difficulty, Cuphead requires you to try the same challenges over and over again. Platforming levels are typically short, but reaching the end will take a near-perfect run with no mid-level checkpoint or 1-ups to be found. Players learn about the precise mechanics of every character over the course of these segments, and each death can be turned into a teaching opportunity about timing and patience.

Nothing is gained from each failure, as the currency for rewards and upgrades are sparsely distributed across Inkwell Isle. Instead, failure only nets you the opportunity to try again with what you learned from the last try. Luckily, it’s never too hard to exit back to the overworld map and fire up another challenge if your current selection has you frustrated. There’s no better feeling than taking down a boss you could barely touch before after you’ve learned how to dodge their attacks or counter certain moves.

Tiny moments of inspiration are common in Cuphead. There is some shared DNA with a game like Dark Souls or more traditional rougelikes, when repeated failure becomes the best way to learn what you’re doing wrong. Both boss fights and action levels tend to take no more than a couple minutes to complete, meaning you can take your time to practice each move carefully without feeling like the game has become a slog.

Another way to improve your play comes in the form of various incremental upgrades. With the small amount of money you make on your adventure, you can purchase helpful modifiers from a nearby shop. These can increase your heart count, weapon range, or the damage you do over time. It’s best to experiment with these loadouts, especially swapping them out based on the conditions of each new challenge. While none of these items are explicitly required to succeed, you may find success easier when running with a boost to your gun’s power rather than an extra life.

Death is the best teacher in Cuphead, while the tutorial and various tips come in second place. You’ll naturally learn when to run, jump, duck, and dive based on how often you fall to certain enemies, but there is one technique that comes a little tougher to master. Certain enemies and objects you encounter will come with a subtle, pink glow. This visual coding means these things can be parried, with an additional jump move your character will get a boost from bumping into them, instead of dying. Some boss fights and other encounters are hinged on your successful parries, so it’s in your best interest to spend some time mastering this technique as early as possible.

Other than that, there aren’t many factors affecting your success other than how well you can play. A handful of helpful characters will guide you along the path forward and introduce new mechanics. You can go back to try boss rushes at higher difficulties if you’re interested in unlocking the game’s true ending, after you’ve built out a healthy selection of perks and items. The game also fully supports two-player local co-op, in case you need a friend to help you get past a tricky segment.

Overall, the Cuphead experience is consistently wonderful. The nostalgic visuals, energetic soundtrack, and jubilant writing make this feel unlike anything you’ve played before. Some of the mechanics and gameplay tropes will be familiar to anyone who has played modern indie platformers, but the unique quirks presented here are among the best in recent memory.

Cuphead is available now for Xbox One and Windows 10.

Disclosure: StudioMDHR provided a copy of Cuphead for this review.