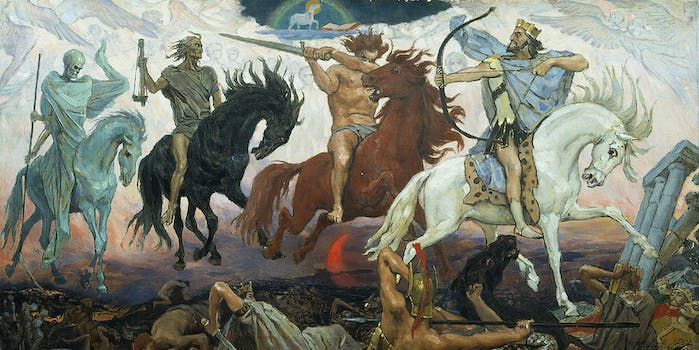 What is with these creepy sky noises?

In keeping with the signs of the apocalypse this week, it sounds like the four horsemen have announced their arrival with this “creepy sky trumpet” video:

According to the Daily Mail, there is a whole YouTube rabbit hole of these weird sky trumpet videos.

And according to the U.K.’s Metro, NASA has a very mundane explanation for these noises. Apparently they’re Earth’s background noise and we usually can’t hear them… but sometimes we do because, reasons?

But the Mail got their information from a 14-year-old blog post on NASA’s science page about Earth songs, which are low-frequency radio emissions that are never audible to the naked ear. To listen to them, they need to be converted to audible frequencies. So that’s definitely not a good explanation for what is going on in these videos. The Daily Dot put in a request to NASA for an official comment on the phenomenon, but the agency was unable to reply in time for the publication of this story.

So we opted to do some of our own Internet sleuthing. A lot of articles about the sounds point to this 2011 video of the spooky metal-grinding noises posted by a user in Kiev:

Since then, videos of the bizarre noises crop up every now and again. And, as Snopes points out, a lot of them sound very much like the noises the tripods made in War of the Worlds or the trumpet sounds from that one scene in Red State.

Some of the higher-pitched noises sound kind of like distorted whale calls. You see where we’re going with this.

Many of the videos are likely hoaxes, says Jason Boyett a writer who publishes books on apocalypse theories.

“And while I can’t say for sure that every single ‘strange sounds’ video is a hoax, I do know without a doubt that a vast majority of them are. Watch the Kiev video. Listen to the birds chirping and screeching,” Boyett wrote on the Huffington Post. “Then listen to a bunch of others, especially those that have been uploaded in the past couple of weeks. You’ll hear the same chirps and screeches. Either the birds are in on the conspiracy, or someone’s ripping the audio from the earlier videos and layering it onto their own version in Omaha or Cleveland or wherever.”

He even went on to make his own hoax video, in part to soothe his children who had become worried after seeing one of the many “strange sounds” videos in school.

It’s true that not every strange-sound video is the same. Perhaps some of them are catching a real phenomenon, like this video of a “vaulting” noise occurring during a baseball game.

The description in the video said that it was captured in 2012, preceding an earthquake on the East Coast. Indeed, some theorize that many of these weird sounds, if they are real, are sort of like the audio version of the northern lights. In other words, they may be distortions in layers of the atmosphere caused by natural events (such as lightning or seismic activity) that transmit as sound waves.

It’s also possible that the sounds come from nearby train tracks or other industrial activity, and the sound carries far when the weather conditions are just so.

But no, probably not aliens, the apocalypse, or anything wacky like that.