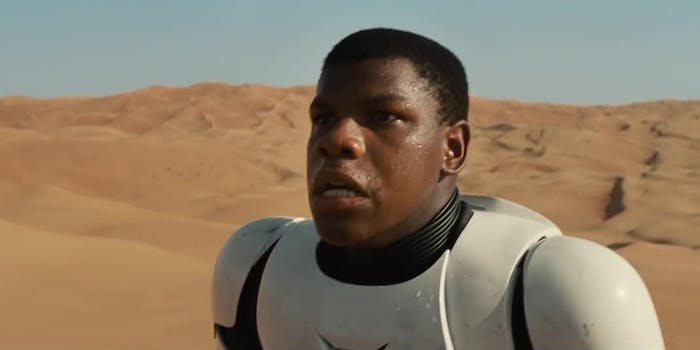 There's nothing the Internet loves to do more than speculate wildly.

To say that the release of the teaser trailer for Star Wars: The Force Awakens was a seismic event in geek culture does not do justice to the magnitude of the moment. Star Wars fans have endless questions about the upcoming seventh episode of the saga, and the teaser trailer didn’t answer any of them.

Naturally, fan theories about what we saw in those 88 seconds populated faster than a 12-parsec Kessel Run. Here are some of the craziest theories spreading on Reddit’s Star Wars board.

Luke is the cloaked figure with the weird lightsaber

“It just seems like the person here walks funny (Luke kinda looked lanky like this in ESB when visiting Dagoba [sic]),” writes user PDXracer. “I just think that this [is] him in the preview.”

Never mind that Luke is played by Mark Hamill, who is nowhere near as tall or slender as the dark figure in the woods. Nothing like an amateur body-language reader’s surface-thin hunch to start your speculation session off right.

The big bad is a famous Sith from the books

Any time a Reddit post begins with the words “Hear me out,” you know you’re in for a good read. Whoever wrote this comment has since deleted his or her account, likely out of sheer embarrassment, but their suggestion remains: Andy Serkis, who is widely reported to be the voice in the teaser, could be playing the Sith Lord Darth Plagueis, who taught Darth Sidious (Emperor Palpatine) before Sidious killed him.

Plagueis’ backstory is explored in a 2012 novel bearing his name; casual fans will recognize his story as the one that Palpatine tells Anakin at the opera in Episode III. Plagueis believed he could influence the Force and its midi-chlorians (yes, they exist, deal with it) to prolong his life indefinitely. The 2012 book, which is not canon, introduced the possibility that Anakin’s virgin birth was the will of the Force to counter the darkness that Plagueis created by twisting life in unnatural ways.

This Reddit post suggests that Plagueis somehow came back to life after his apprentice killed him. It gets weirder: “Then he uses that power to resurrect a powerful sith, Adam Driver(maybe Darth Revan?, the sith from the trailer was walking weird as fuck too, maybe he hasn’t taken any steps in the last 5,000 years. . and he had an old lightsaber)”

“This was too much of a coincidence to ignore,” begins the text of a graphic posted by TheIntragalacticPimp. This user goes on to suggest that the black circle on the back of the stormtrooper armor worn by John Boyega represents an elite class of stormtroopers.

The black circle appears, albeit in a different place, on the armor of a top-secret stormtrooper unit in a Dark Horse comic series that wrapped up earlier this year. Despite the fact that the circle’s location is different, this redditor thinks “it might still be a noteworthy clue as to his duties while serving the Empire.”

There are sad theories and then there are pathetic theories. Reddit user StanTheRebel’s theory definitely fits into the latter category. He proposes that John Boyega and Daisy Ridley are not playing new characters at all, but rather, characters ripped from the second volume of the Star Wars: Legacy comic series.

StanTheRebel makes his unimpeachable case with a comparison image that is straight out of CSI. 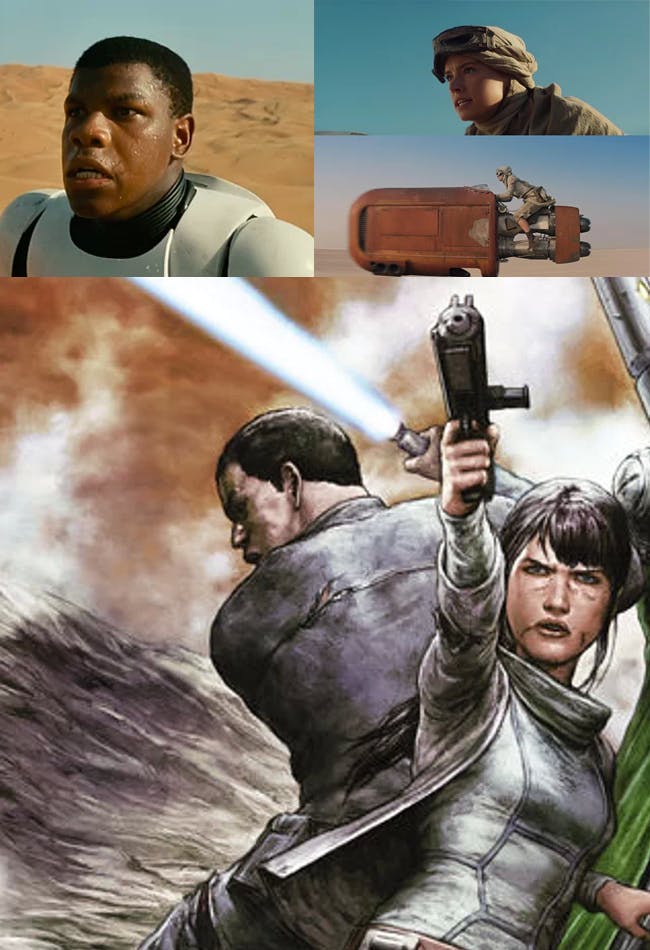 In the comments, another user says it’s “weird how much of the premise seems to align with that comic with what we know.” A third person tries to point out how insubstantial the similarities are, and then a fourth redditor responds with a few more generic similarities.

For a site that falsely accused innocent people of being domestic terrorists, Reddit is home to a surprising amount of unimaginative thinking when it comes to future pop culture storylines. The idea that Lucasfilm would copy its newest lead characters from a fairly forgettable comic series is downright ludicrous. It’s practically an insult to J.J. Abrams and Lawrence Kasdan, who wrote the film’s script, to suggest that The Force Awakens could be that maddeningly unoriginal.

The voice in the teaser was Darth Maul

We’re just going to present this one verbatim:

Think about it, we hear very little of his voice in episode I and he would obviously be pretty old so that would account for any voice changes. Do you think there is any possibility? I mean they haven’t killed him off in the official canon right?

While it’s true that Darth Maul is alive, this idea is so laughably uncreative and out of left field that Star Wars fans might riot if it proved true. It won’t, of course, which is why instead of worrying about this theory we can chuckle at the top comment on the post:

Maybe Lobot is the cloaked figure with the crazy lightsaber?