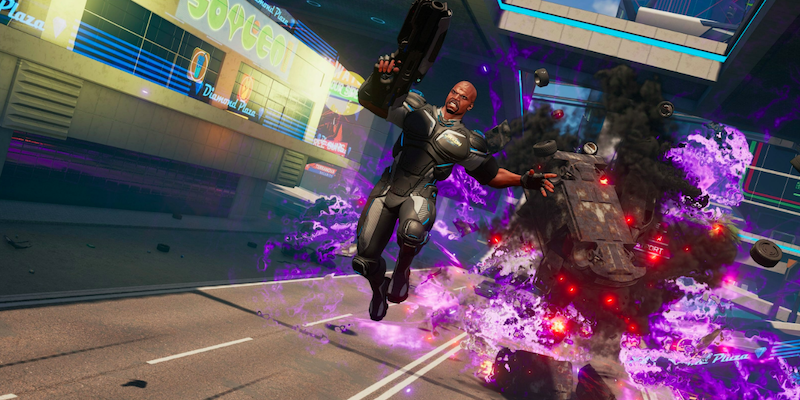 Review: Crackdown 3 is not a world worth saving

One of the Xbox One’s biggest exclusives to date feels like too little, too late.

The game was first revealed as a blockbuster Xbox One title at E3 2014. After the much-maligned diversion that was Crackdown 2, dedicated fans were eager to dive back into the explosive, guilty pleasure sandbox as it was in 2007. But as Microsoft’s business plan for the Xbox One changed, development of what should have been one of the console’s premier pieces of software stalled for years.

It was first given a late 2016 release date, then pushed to launch alongside the technical improvements of the Xbox One X, then delayed again to early 2018. Now that Crackdown 3 has landed, it will come to most players for free via Xbox Game Pass—which may be the perfect place for it.

As it stands, Crackdown 3 is a dated, uninspired open-world action game that does manage to occasionally excite despite a lingering staleness.

This is all presented in a hierarchy that calls back to Shadow of Mordor‘s nemesis system. Here, you have a series of baddies progressing from the lowliest street grunt all the way up to the head honcho. Crackdown 3 sets the stakes early on and sets you free to do what you will.

An absurd tonal whiplash serves to open your story. As the Agency prepares to take the fight to New Providence and liberate refugees being oppressed by the aforementioned Terra Nova company, disaster strikes. What begins as an over-the-top action movie spoof spins into a disturbing cyberpunk story and sets up the plight of faceless asylum seekers.  If that weren’t enough, the opening 15 minutes are told over cutscenes with three distinct art styles; it’s almost like you’re watching the development woes of Crackdown 3 in action as you play.

Smartly, the game doesn’t attempt to tell much more of a story. The Agency has given you the best weapons, the people you’re meant to fight are the worst assholes imaginable, and there’s a lot of shit to go blow up. What else do you need to know?

This premise could work. While it is simple, it compels player momentum. Crackdown 3 comes with a detailed checklist, and how to solve it is up to you.

Problems start to arise when the game’s repetitive design comes to light. More often than not, the missions you engage involve finding a hostile compound, clearing it of enemies, and claiming some kind of command station. Now, sometimes they vary between tall towers, high-security prisons, or chemical plants. But any minor visual flair is only meant to distract from the fact that you are doing a lot of the same things in Crackdown 3 over and over again.

As you go through these tasks, your Agent’s skills change. When I started Crackdown 3, I already found the character movement and core combat satisfying. Thankfully, that opening hour is when my character was at the absolute weakest. Options like a dash jump became available as I explored, and it didn’t take long before my arsenal of weapons was double what I had started with.

Quickly, the game falls into a pattern of setting specific goals to push progression. Using explosive weapons unlocks new grenades, opening tougher combat areas, thus giving the player a way to boost their combat skills. Each escalating bracket offers enticing perks, enough to always have something to work toward. So much of the game, though, becomes background noise. Just when a mob of nondescript enemies becomes mind-numbingly simple to dispatch, new options open a slightly different area of the map—complete with new boxes to check.

If Crackdown 3’s combat appeals to you, there’s plenty to be had here. Gameplay rarely evolves outside of a few helpful tools and vehicles that help reach new heights in the city. The campaign supports multiplayer co-op, and bringing mayhem with a buddy may make the experience more exciting.

Competitive multiplayer modes let players hop in with a fully leveled-up agent and include access to the entire swath of available firepower. There’s a standard team deathmatch and capture-the-zone offering that do very little in terms of new ideas, aside from the fully destructible arenas.

Nothing in Crackdown 3 is particularly exciting, and nothing pretends to be. That most players won’t be asked to pay full price for this title might be its biggest appeal. Xbox Game Pass subscribers were probably already curious about Crackdown 3, and it’s worth checking out briefly just to see how these various sandbox mechanics interact. I won’t deny that I had fun with the hours I spent trashing New Providence, but they were spent mindlessly. This was the perfect game to sink into as I listened to a few podcasts, a perfectly fine way to kill an afternoon. The most damning thing I can say is I felt like Crackdown 3 knew I didn’t care about what I was doing—and never went out its way to even try pulling me back in.

Crackdown 3 is available now on Microsoft Windows and Xbox One. This review was written based on an Xbox One copy of the game provided by the publisher.