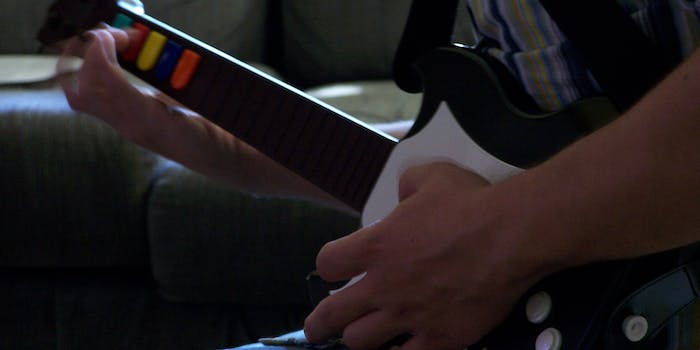 Think Dark Souls is sadistic? Try it with a Rock Band guitar

When someone beats Dark Souls, it’s a badge of honor. It requires patience, moxie, and resolve.

But someone just schooled Dark Souls veterans so bad they may have to rip off those badges.

Maestros of the control pad and virtuosos of the keyboard and mouse alike are afraid of Dark Souls. It is one of the most punishing video games ever. It mocks you by resetting your progress through tortuously difficult dungeons whenever you die. It invites other players into your game specifically to screw with you. It is, in a word, sadistic.

Rock Band is no Dark Souls, but the guitar peripheral is still challenging to master. Getting 100 percent perfection on a Megadeth shred-metal track at the hardest difficulty can turn wrists into rubber. Pulling that off is also a mark of distinction.

What, then, do we award someone who mapped the controls for Dark Souls onto a Rock Band guitar, and then proceeded to own Dragonslayer Ornstein and Executioner Smough, two of the most difficult bosses in Dark Souls?

The virtual gladiator who pulled this off goes by GMABT on Reddit, where he laid out the details of his attempt, and goes by bearzly on Twitch, where he’s compiled videos of his various “Guitar Souls” runs.

If you want to attempt this feat yourself you can find a control mapping guide here. Best of luck. You’ll need it.