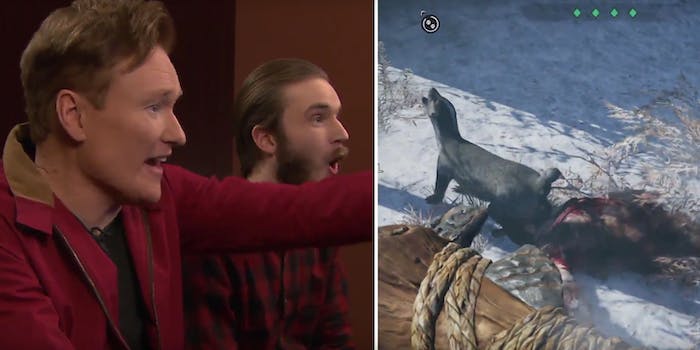 Look out for Conan's vicious badger!

You’d think Conan O’Brien would eventually get just a little better at playing video games, for all the Clueless Gamer segments he’s done.

Instead, in his latest video game outing Conan spends a healthy portion of his time staring up at the sky and spinning in circles while playing Far Cry Primal with the preposterously successful YouTube star PewDiePie.

Conan also can’t resist a cheap butt joke, and when poking things with spears is in the mix the humor is guaranteed to take a nose-dive into the high school locker room.

If you want to learn more about Far Cry Primal check out our review!

Far Cry Primal was released Tuesday for PlayStation 4 and Xbox One. It will be released for PC on March 1.