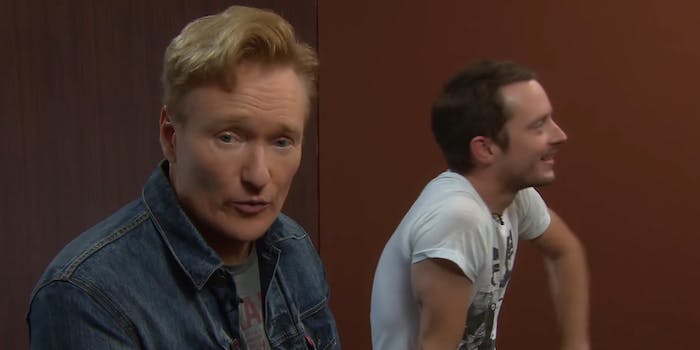 Conan’s ‘Clueless Gamer’ segment could be getting its own show

Conan won't host but he will be behind the scenes.

Amid rumors that Conan O’Brien would move his late-night TV show, Conan, from nightly to weekly, TBS is doubling down in TV’s most experienced late-night host with a spinoff in the works.

In a larger interview with the Hollywood Reporter to shoot down those rumors, which first surfaced at CES, TBS president Kevin Reilly revealed that a Clueless Gamer series is currently in the works. Along with O’Brien’s special episodes where he chronicles his misadventures in different countries around the world, “Clueless Gamer” is among his most popular segments. The segments showcase upcoming games as O’Brien, who doesn’t know all that much about gaming, plays along with actors, video game experts, and sometimes athletes—such as his annual head-to-head with NFL players pre-Super Bowl.

“We’re going into production next month on a new series, Clueless Gamer, based on the viral video [Conan O’Brien has] done where he essentially makes fun of video games, gets celebrities to play and makes commentary on them,” Reilly said. “We’ve gotten to the point where video game companies are sending us their new product for us to play and make fun of because it’s been such a huge success. We’re going to go into production on a series of that.”

While the Clueless Gamer series is still in development, there’s a good chance that it will go to series. O’Brien will produce the show but he’ll hand off hosting duties to someone else. And if it does get greenlit by TBS, it’ll join an already full lineup of TV shows based on late-night viral segments. Lip Sync Battle is already multiple seasons in, James Corden’s “Carpool Karaoke” is inspiring two upcoming TV shows on Spike and Apple TV (and he also has Drop the Mic for TBS), and Jimmy Kimmel’s “Who Knows” segment is the basis for Big Fan.

A Clueless Gamer show would be a bigger investment in O’Brien, who has a deal at TBS through 2018. Nothing’s official beyond that, but Reilly is confident that TBS will “be in business with him for a long time.”