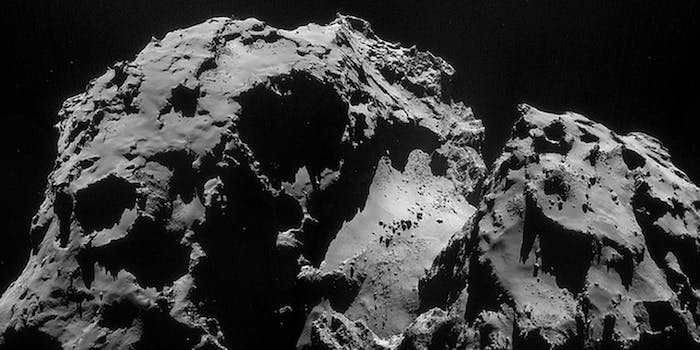 These ‘comet song’ remixes are pretty far out

The alien sounds of Comet 67P have been making the rounds this week, and since this is the Internet, the “song” has already gotten a remix.

It was reported yesterday that the Rosetta spacecraft had recorded sounds from the comet that were not able to be heard by normal human beings. European Space Agency officials said the “song” was the result of “oscillations in the magnetic field in the comet’s environment.” Scientists then made the sounds audible by boosting the frequency.

And here’s the slow-jam R&B remix, uploaded to SoundCloud by producer Hook A Land, performed by K’REAM. This is great sexytime music, if you’re looking for a weekend soundtrack.

Vangelis, perhaps best known as the composer of “Chariots of Fire,” also offered his ESA-approved score for the comet landing with “Rosetta’s Waltz.”

It’s only a matter of time before Girl Talk’s using the comet song in his live set.