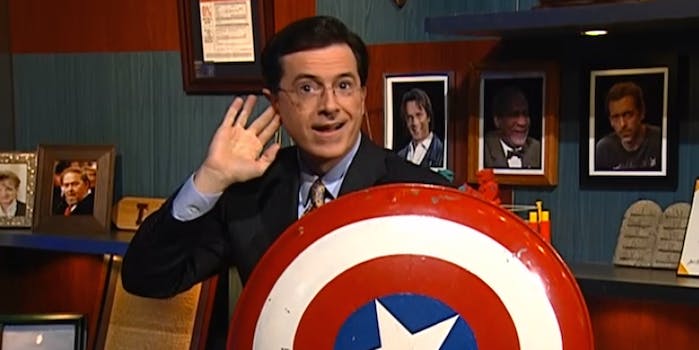 Is Stephen Colbert secretly an agent of Hydra?

Trust no one in late night.

The evil forces behind Captain America: The Winter Soldier and Agents of S.H.I.E.L.D. may have gotten their hands on one of America’s favorite late-night hosts.

Stephen Colbert has been a friend to Steve Rogers and Marvel for years, but he may not be the pure-hearted fan we’ve always known him to be.

Some super-savvy Marvel fans spotted a disturbing message displayed during the intro of The Colbert Report’s Monday night episode.

Colbert has made it into the pages of a Marvel comic and has even been depicted as the Hulk by Joe Quesada. And when Captain America “died” in the comics in 2007, he gave his iconic, indestructible shield to Colbert, “the only man he believed had the red, white, and blue balls to carry the mantle.”

Looks like we’ll need to get that shield back from @stephenathome. http://t.co/dPZNpSP4Os

With Colbert set to take over The Late Show sometime in 2015, he’s about to get access to an even larger audience. Is this all part of an evil plot by Hydra? Or will Colbert’s apparent allegiance to the evil sleeper organization die with his character? We’ll just have to wait and see.