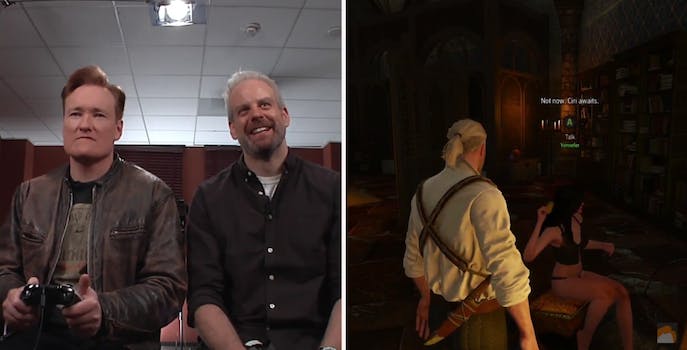 Conan isn’t hunting for monsters in his The Witcher III: Wild Hunt review

Conan takes his The Witcher III review to middle school.

In the Witcher series of role-playing games, players take on the role of monster hunters who travel around slaying unholy beasts that terrorize local populations. Like other games in the genre, it also takes an adult view when it comes to sex, meaning it assumes gamers are adults who can handle there being some adult content in their games.

Unfortunately, in his latest Clueless Gamer segment Conan does his best to question that point of view. Once he realizes that sex is something that could happen in The Witcher III: Wild Hunt it’s all that he wants to happen, so his adventure to slay monsters and save the realm isn’t actually about slaying monsters and saving the realm.

Please be more mature when The Witcher III: Wild Hunt is released for PC, PlayStation 4, and Xbox One on May 19?