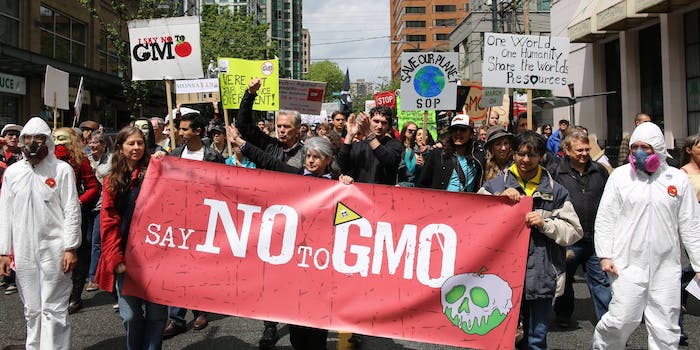 Does your food contain genetically modified ingredients? This test could tell you

This comes at the same time as some new legislation.

The label would apply to any food item whose DNA was mutated in a lab via radiation, gene deletion, or inserting a gene from another species (transgenesis). It’s seen as a partial victory for some anti-GMO advocates, according to NPR. But the laws would not require food companies to disclose how or why those ingredients were modified, according to the New York Times.

That may be, in part, because GMO is both a poorly defined category and difficult to track within the food system.

In a phone interview with the Daily Dot, Mahni Ghorashi explained that current genetic tests for GMO ingredients only look for a single gene at a time, and can cost between $175 to $200 per test. “That’s not scalable at all,” he said.

Most manufacturers simply record where seeds and crops came from to keep track of genetically modified ingredients.

“The key difference of our test versus anything that’s out on the market today is that it’s able to scan for all GMO genes in parallel in one universal test,” Ghorashi said.

This test could detect any gene spliced into an ingredient from a different species, as well as any mutations or deletions of specific genes that are known to be part of a GMO program.

In theory, this could someday allow food manufacturers to label where the genes came from and what their purpose is. For example, manufacturers could explain in the QR code that an ingredient had DNA spliced in for a particular purpose, like making a crop more resistant to pests in order to cut down on the use of pesticide.

The question of whether or not to label GMOs and how is a hot-button issue, and it has been for a while. Although several scientific groups, including the American Association for the Advancement of Science say GMOs pose no risk to human health, it’s hard to conceive of why anyone would not want to label GMOs, but there are some good reasons.

One of them is that the word “GMO” is somewhat meaningless, Nate Johnson, a food writer for Grist, told the Daily Dot over the phone.

Johnson wrote a long piece for Grist in 2015 deconstructing what GMO means and why the definition is a moving target. In short, it’s because no one can agree at what point genetic modification departs from “naturalness” and typical agricultural practices and moves into the realm of the unnatural and unknown.

Another argument against labeling GMOs is doing so may drive them off the market almost entirely, as is the case in the European Union.

According to an article in Scientific American, that’s not exactly a good thing for a lot of reasons:

Many people argue for GMO labels in the name of increased consumer choice. On the contrary, such labels have limited people’s options. In 1997, a time of growing opposition to GMOs in Europe, the E.U. began to require them. By 1999, to avoid labels that might drive customers away, most major European retailers had removed genetically modified ingredients from products bearing their brand. Major food producers such as Nestlé followed suit. Today it is virtually impossible to find GMOs in European supermarkets.

Americans who oppose genetically modified foods would celebrate a similar exclusion. Everyone else would pay a price. Because conventional crops often require more water and pesticides than GMOs do, the former are usually more expensive. Consequently, we would all have to pay a premium on non-GMO foods—and for a questionable return. Private research firm Northbridge Environmental Management Consultants estimated that Prop 37 would have raised an average California family’s yearly food bill by as much as $400. The measure would also have required farmers, manufacturers and retailers to keep a whole new set of detailed records and to prepare for lawsuits challenging the “naturalness” of their products.

(Scientific American also published an article the same year making the argument for labeling GMOs. You can read it here.)

“I think in the U.S. it’s different. So much time has gone by, so much more science has come out. We’re just more interested in accepting dynamism and innovation in the U.S.,” Johnson said. “The anti-GMO movement are using labeling to attack companies, I think that they overestimate how much people care about it.”

But Johnson also said that, as a general principle, he likes the idea of making information available to consumers—especially very specific labeling that might explain how and why a certain ingredient was modified.

“I think [the opposition] just comes down to the fact that labeling GMOs doesn’t really tell you anything,” Johnson said. “What it tells you is, ‘this thing belongs to a political tribe that you may oppose.’”

And with this new test, Clear Labs might help consumers choose more carefully.

“Whatever personal belief I may have on the GMO debate,” Ghorashi said, “I’ll set that aside. Our stance as a company, clear labs, is all about transparency and the ability to provide brands and ultimately their consumers with the ability to know whether or not a product that they’re purchasing actually contains gm components to it, and then the right to choose.”