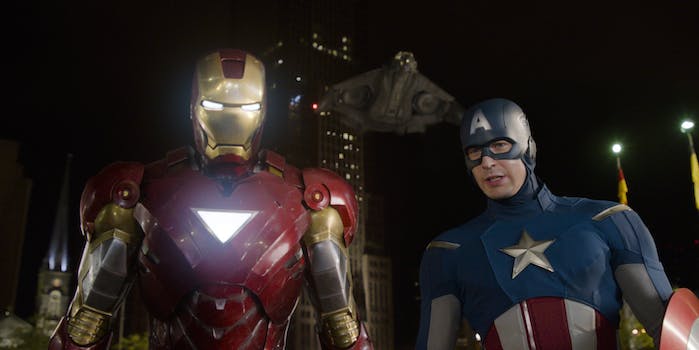 Did these set photos from ‘Captain America’ just reveal a huge Marvel death?

The floodgates have opened on set photos from 'Civil War'—and the possible spoilers aren't fun.

It’s only been a few weeks since the premiere of Age of Ultron, but the Avengers crew are already hard at work on the set of Captain America: Civil War. Unfortunately, that means we’re already getting glimpses of potential spoilers that not everyone is happy about.

JustJared unleashed a plethora of photos today from the set of Civil War revealing Chris Evans and Anthony Mackie in costume for the first time, as well as photos of Scarlett Johansson apparently doing stunt work and the first look at the character of Crossbones. In addition, Tumblr user romanovsa posted several photos of Johansson and Evans together in character as Black Widow and Captain America. And LaineyGossip posted a set of photos as well, including some especially provocative photos containing some possible spoilers. (We’ll get to those in a moment.)

CROSSBONES looks DOPE! I so want that helmet! #CaptainAmerica #CivilWar

We also got this awesome shot of Evans, still in costume, distributing water to the crew on the hot set, courtesy of melanieexos on Tumblr: 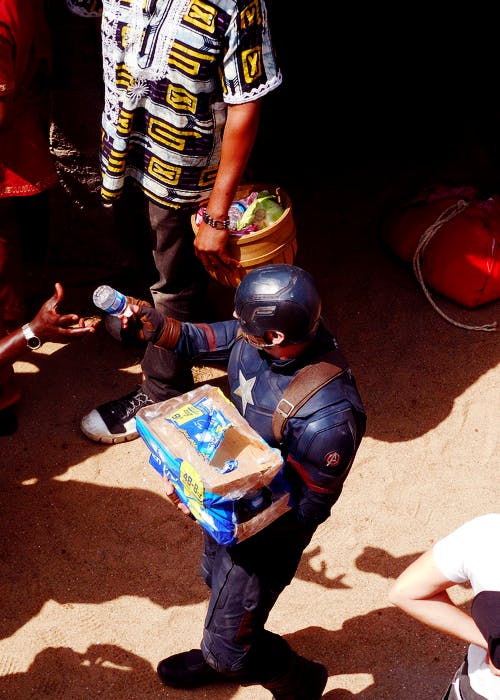 Other photosets included Emily VanCamp, who played Evans’ neighbor-slash-secret S.H.I.E.L.D. agent in Winter Soldier and is rumored to be Evans’ love interest in this film.

But there were was one photoset from the filming that has raised plenty of alarm.

The photoset, released by LaineysGossip quickly made the rounds on Twitter and Tumblr. (Now is where we warn you for spoilers ahead!)

The series of photos depicts Captain America attending the funeral of an unknown character. There’s been no word officially on who it could be, of course, but there’s one huge giveaway in the form of the flag draped over the casket: it’s British.

That means, at least according to popular speculation from among the Marvel fandom, that the most likely candidate is someone whose death has been a long time coming. Literally, that is.

Although she’s still young in her own series, Agent Carter, in the Marvel Cinematic Universe Peggy Carter has aged seven decades since Steve Rogers last saw her. As a British national, she’s the most likely candidate for someone to be buried with honors who could put that sad look on Steve’s face.

But cheer up, Marvel fans—we still have a full year between now and the film’s release, which is more than enough time for us to come up with new theories for the scene, which will probably end up being wrong altogether—especially given how many characters are going to be in this mishmash of a film.

Photo via bagogames/Flickr (CC BY SA 2.0)