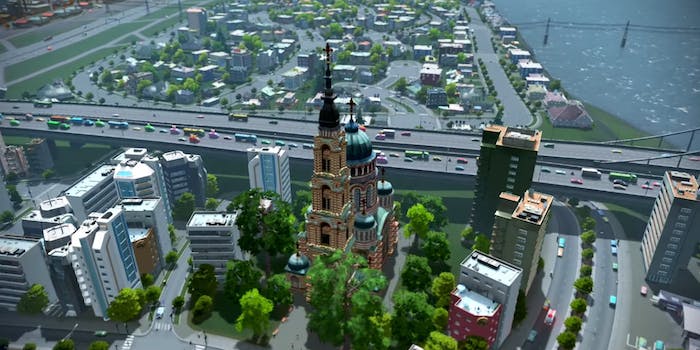 Players flock to Cities: Skylines for a building and modding bonanza

Amazing city constructions were finished only days after the game was released.

When SimCity failed to deliver the city simulator game fans had been waiting for, a relatively unknown studio named Colossal Order moved in to take over the genre with Cities: Skylines.

Even though Cities: Skylines was released less than two weeks ago on March 10, it has been proclaimed the new king of the city-builder genre by critics and the press. There is no truer measure of this new reign than the unbridled enthusiasm poured into Cities: Skylines by its players. Thousands of mods and some impressive construction projects have already been completed for the game.

Website Skylines City hosts a deep collection of player-created content, to be downloaded and freely shared. You can find maps for Paris, Venice, Stockholm, and Gotham City. There are mods to improve visual aesthetics, alter game mechanics, and to integrate social media tools. The slew of available downloadable assets include simple props like shopping carts and snack machines, real-world landmarks like the London Eye and the Notre-Dame de Paris, and functional upgrades like fusion reactors to provide power for cities.

On Tuesday, Motherboard published an interview with Mariina Hallikainen, the CEO of Colossal Order, the studio that developed Cities: Skylines. “It seems that people have been modding pretty much everything we planned on adding ourselves, so we have to step back and see what we can do for the players that hasn’t been done already,” Hallikainen told Motherboard. “I think there are 7,000 mods. It’s completely insane.”

Kotaku has curated some of the most interesting mods. Warning systems about traffic congestion, automated disposal of waste generated by cities, and a first-person camera all made the top of the list. It’s as though games like Minecraft, which promote the pure creativity of construction, and the rise of mod culture, have laid the groundwork for the immediate success of Cities: Skylines.

Even a former artist for SimCity, the 2013 de facto reboot of the franchise that birthed city simulation, has gotten in on the modding action. Bryan Shannon was employed by Maxis Emeryville until the studio was shut down on March 4 by Electronic Arts.  Now he’s creating assets for Cities: Skylines and accepting Patreon donations for his work.

The key, it seems, to the success of Cities: Skylines is player choice. SimCity in 2013 tried to lock players into an online-only world. Electronic Arts and Maxis were telling people how they had to play SimCity. The online functionality was responsible for the game’s disaster of a launch, and ultimately for the seeming fall of the franchise.

Where EA and Maxis forgot that freedom and creativity go hand-in-hand, publisher Paradox Entertainment has demonstrated the truth of it.