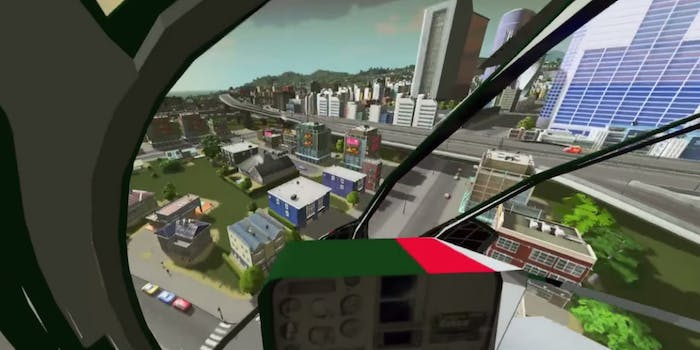 Helicopter mod is giving us lovely views of Cities: Skylines

A personal whirlybird means players can examine their cities up close.

A first-person view from within a helicopter is making for wonderful urban tours in Cities: Skylines.

The enthusiasm the city sim game—one that meets expectations, unlike 2013’s SimCity—has led to an explosion of creative mods for and huge builds in the game. A new mod from Cities: Skylines builder Nisquity isn’t concerned with buildings, but rather with introducing a new way to explore the cities players are rapidly constructing.

The CityCopter mod only has an alpha build right now (a very early version that may be radically different from the final product), but a demonstration of the alpha version shows the mod’s potential. It looks very similar to flying around Los Santos in Grand Theft Auto V in a small, nimble helicopter. That’s meant as high praise.

CityCopter has its own subreddit, which you can follow for more information on the project and its progress.

Cities: Skylines was released for PC on March 10 and was announced two days later as the fastest-selling game ever published by Paradox Interactive.