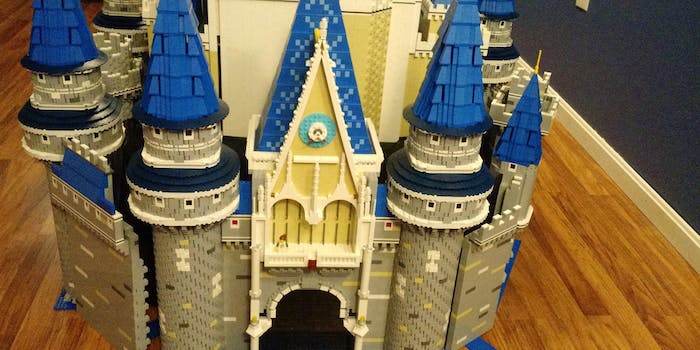 There are 50,000 Lego bricks in this stunning replica of Disney’s Cinderella Castle

A dream is a wish your heart builds.

What can you build with 50,000 Lego? If you’re an enterprising Disney fan, the answer is obvious: Cinderella’s Castle. 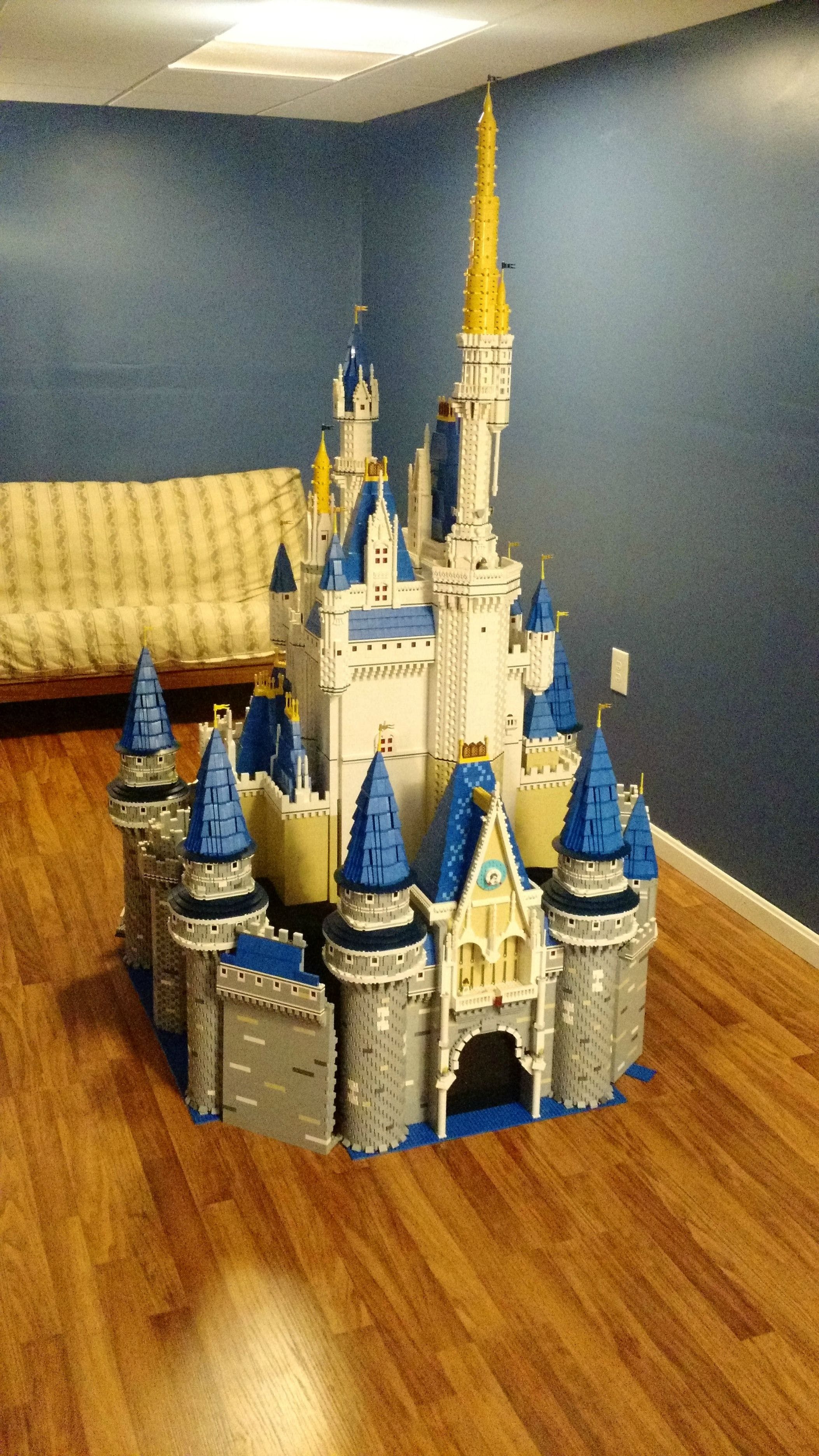 On Tuesday, longtime Disney fan Erik Jones created accounts on Reddit and Imgur for the purpose of sharing his newly built monument: a full scale model of the Walt Disney World castle. The piece is more than 6 feet tall and nearly 5 feet wide, and weighs more than 100 pounds when assembled.

The final product uses 50,000 Lego pieces. “It took me almost a year to design, source and build, but I broke it up into manageable chunks,” Jones wrote. The actual build took five months. 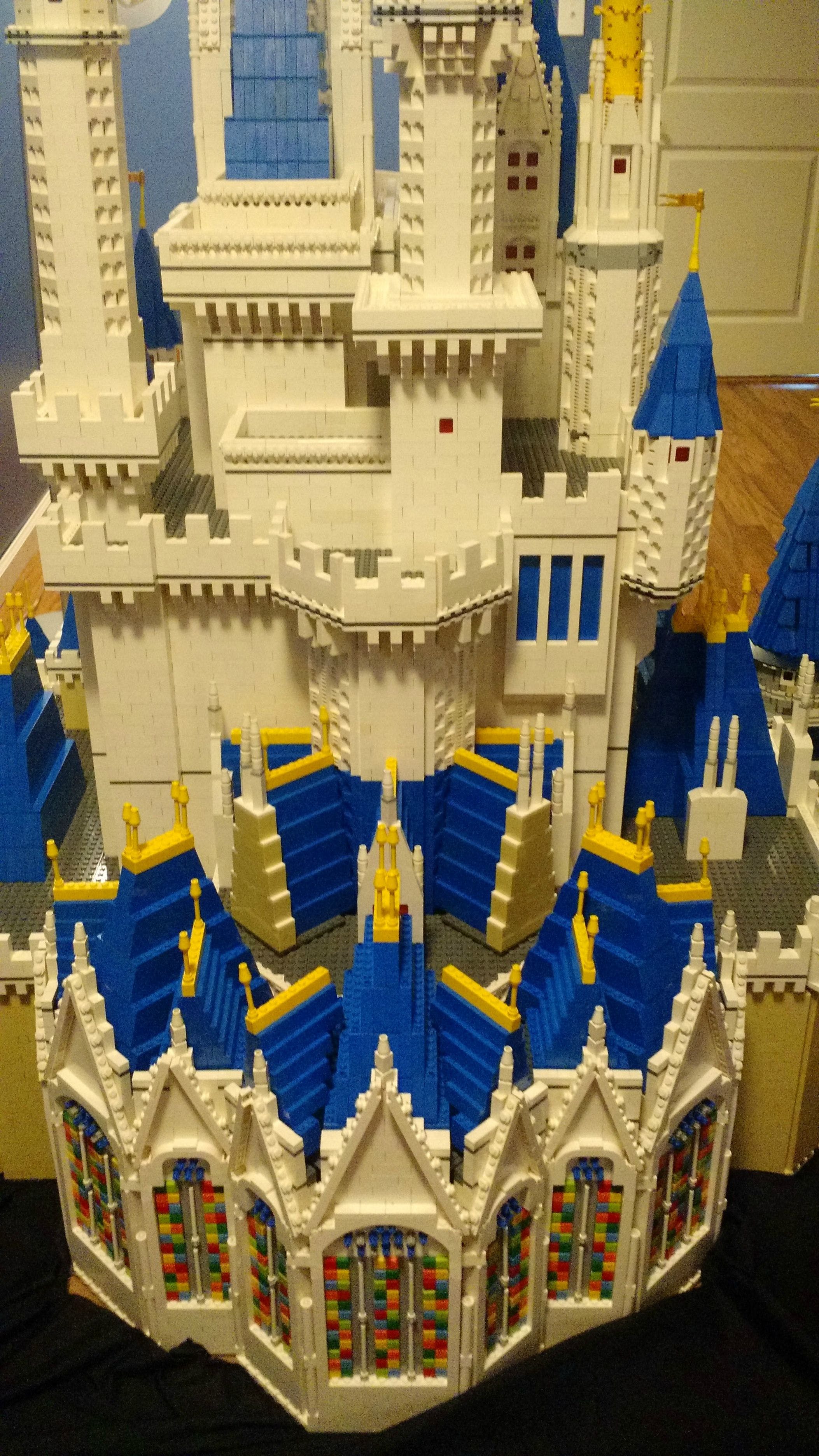 Speaking to the Daily Dot by email, Jones stated that he’d long been fixated on the idea of building the castle:

I’ve been a huge Disney fan for many years, and starting getting into Lego when I saw a Lego Architecture display at the National Building Museum about five years ago. And one day at Disney World I looked at the Castle, looked at the bricks in the walls, and said to my wife, “I’m going to build that in Lego.” I didn’t realize at the time what a massive project it would be, however!

Jones designed the layout in Lego Digital Designer, a free software for Lego modeling, in what’s known as “minifig scale”—to the scale of a regular Lego figure if they were the size of an actual person. Jones went on an epic hunt for special bricks, and painstakingly created details like the castle spires and stained glass mosaics. The blue turrets were the hardest part of the piece since regular Legos don’t normally have that particular shape.

“I tried to be as faithful as possible to the original structure of the castle and the decorations,” Jones said when he uploaded his gallery to Imgur.

“I had to plan out everything carefully, and even then I had to tear down and rebuild a few times for structural integrity,” he told another impressed redditor. The castle consists of 12 interlocking parts that Jones built separately and then attached. The center is supported internally by a wooden platform.

And, of course, there are sentinels keeping watch:

The full cost of all those bricks was around $4,500, according to Jones—but he claims he saved more than $5,000 by buying used bricks from Lego trade website BrickLink instead of new ones.

Since a giant Cinderella’s Castle won’t exactly fit on a coffee table, Jones is now looking for a new home for the model—possibly donating it to a children’s hospital or other charity.

All we can say is that Jones’ miniature mansion is every kid’s dream come true.

You can see the whole gallery on Imgur, and read more about the build process on r/Disney or r/Lego.