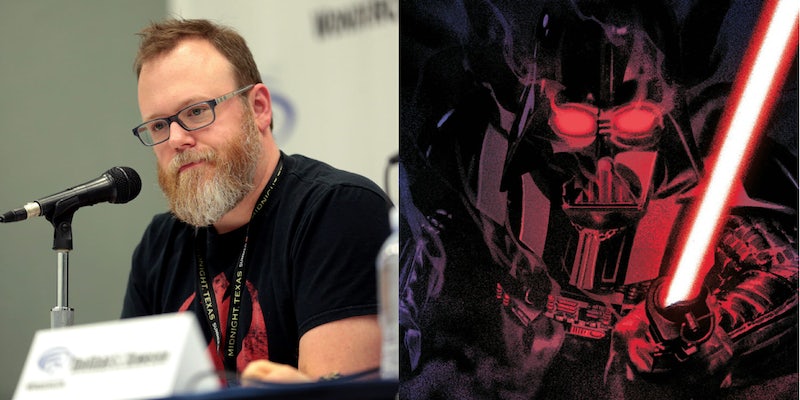 He was told his Twitter had too much 'vulgarity' and 'negativity.'

Lucasfilm Publishing announced at New York Comic Con last week that bestselling author Chuck Wendig (who’s best known for the Aftermath trilogy) was writing a Shadow of Vader miniseries for Marvel Comics. But less than a week later, Wendig revealed that he was kicked off the Star Wars project due to the “negativity and vulgarity” that results from Wendig’s Twitter account.

Wendig made the announcement on Twitter Friday afternoon, informing his followers that he would no longer write the final two issues of Shadow of Vader.

So, here’s a thing that has happened – I just got fired from Marvel. Taken off issues 4 and 5 of SHADOW OF VADER, and taken off an as-yet-unannounced SW book.

This might be a long thread, so apologies in advance.

Marvel declined to comment but confirmed that it was parting ways with Wendig.

Wendig said that he had been on the receiving end of harassment from “a certain subset of fandom” since he decided to include LGBTQ characters in Aftermath. He experienced an onslaught of negative book reviews (outside of people who genuinely did not like the book) and saw online campaigns brought against him. Some of the harassment contained personal information, and he alerted local authorities about the possibility of a swatting campaign being used against him. But as far as Wendig knew, Lucasfilm was perfectly fine with how he handled the harassment. (Wendig also noted that he doesn’t believe Lucasfilm was involved with his firing.)

He went on to write Hyperion and the comic adaptation of The Force Awakens for Marvel. Wendig said the targeted harassment escalated to another level after the release of The Last Jedi—while acknowledging that others have likely had it worse than him due to other harassment campaigns like Comicsgate. Wendig figured he was still in good standing with Marvel, especially since he had just been announced as the writer of Shadow of Vader.

According to Wendig, the decision to fire him came from his editor Mark Paniccia, who Wendig said had “seemed genuinely upset at my tweets and profanity.”

Basically, because I was not civil.

Wendig understands that his editor had the right to fire him over his Twitter account, and ultimately, Wendig wants the Shadow of Vader comic to succeed. But he also worries about the larger implications of being fired for getting political on Twitter, especially after the alt-right campaign that led to the firing of Guardians of the Galaxy director James Gunn.

If they honestly feel that my presence will damage the book, I don't want that. I want the book to shine, and artists like Juanan Ramirez and Greg Smallwood to do their amazing thing. Artists like that are gods in my mind, so I'm happy to not distract from their literal magic.

And it seems odd to be mad that I’m mad about politics when – well, look around. Climate change, kids in cages, sexual harassers at the topmost tiers of power, and so on. A call for civility as the PA GOP candidate threatens Tom Wolf with a golf cleat stomping. I dunno, man.

To conclude: this is really quite chilling. And it breaks my heart. I am very sad, and worried for the country I live in, and the world, and for creative people all around. Courage to you all.

I have a dire fear this is going to get a whole lot worse before it gets better.

Wendig is the second high-profile Marvel writer to lose a series in the past month. Chelsea Cain’s Vision series was abruptly canceled, reportedly due to a “shift in long-term publishing plans for both the superhero Vision and his daughter, Viv.” Cain, who previously faced harassment from fans, also tweeted what happened to her series, noting that Marvel wanted her to keep Vision’s cancellation “clean and quiet.”

Cain said that she spoke up because as someone with a writing career outside of comics, she could afford to when other freelancers could not. Wendig, who is a bestselling author outside of his work with Marvel and Star Wars, has similar privilege.

Marvel editor-in-chief C.B. Cebulski, who admitted to inventing a fake Japanese persona so that he could write comics while being an editor, recently said that Marvel Comics can’t “get too deep into the politics.” The comic industry’s delay in taking action against Comicsgate also demonstrated an unwillingness to directly call out fans harassing creators. It’s even grimmer that the industry may be more willing to fire writers who are vocal on social media about politics, or the kind of harassment they receive, than to lose customers.