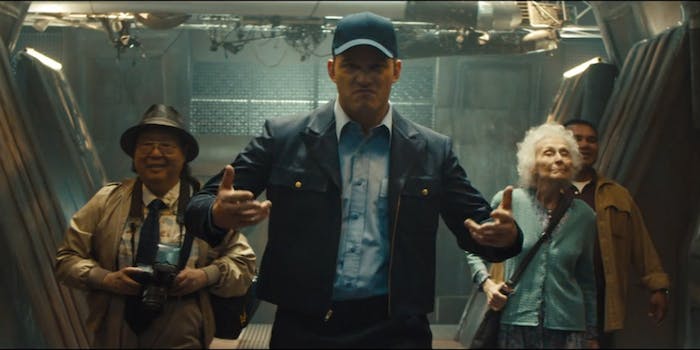 Admit it. You'll see any random movie concept Marvel sells to you, no matter how over the top.

Would you go see a movie starring a bunch of random weirdos, or maybe a shopping cart or two?

You would if that movie was a Marvel movie—as last night’s Saturday Night Live spoof showed us. The skit was the highlight of a fabulous 40th season premiere with host Chris Pratt that proved the comedy powerhouse is still on top of its game.

Featuring Pratt and a host of unlikely intergalactic heroes, SNL‘s Marvel trailer lovingly mocked the success of Guardians of the Galaxy, which surpassed all expectations to become the year’s highest-grossing movie. Marvel’s ability to turn a movie about a rag-tag group of random characters, including a monosyllabic tree, into box office gold means it may have joined Pixar on the rare list of movie studios that can’t fail.

“We made a superhero team by pointing at a bunch of random words in the dictionary,” according to SNL‘s spoof Marvel creators.

In a series of increasingly hilarious concepts for follow-up superhero movies, SNL argues that Marvel could pretty much sell us anything, no matter how ridiculous, and we’d line up to buy tickets.

And the funniest part of all? We’re pretty sure they’re right, because we totally want to see all of these movies right now.

Seriously, how awesome would a movie called Fancy Ghosts be? And forget about a Black Widow movie: Pam and little old bus lady are the heroes we need.

We’d go see at least three of these films. At least twice. Oh, no, Marvel has us right where it wants us. And we can’t even care because we’re too busy listening to Awesome Mix Vol. 1.