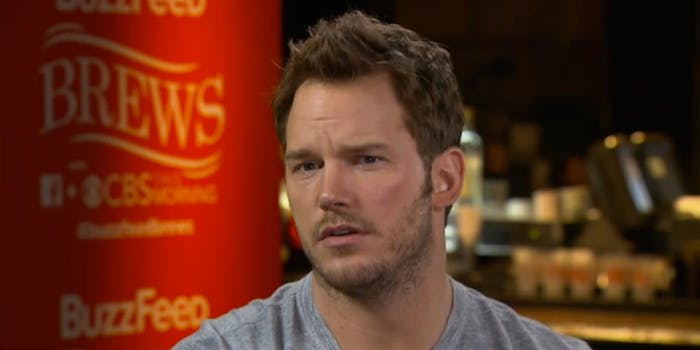 Even better, the interviewer didn't make him read it.

Chris Pratt may have discovered fanfiction today, and he’s all for it.

He sat down with BuzzFeed’s Whitney Jefferson on Wednesday for BuzzFeed Brews, a series of interviews with CEOs, politicians, and celebrities, As he’s proven in other recent interviews (recently French braiding an intern’s hair), he was full of hidden gems, even before the cameras started rolling.

Pratt touched on other loveable preferences and quirks, discussing how he learned to French braid hair in the first place, his favorite pizza toppings, and his interest in comic book art as a kid. But what piqued the interest of many in the audience were his thoughts on fanfiction after being introduced into the Marvel family in Guardians of the Galaxy, which opens Thursday in the U.S.

In many cases, when fanfiction is brought up in an interview, a celebrity is asked to read works involving his or her character, and it’s awkward, embarrassing, or oftentimes seen as an insult to the fans.

Thankfully, Jefferson didn’t make him read any fanfiction, but she told him to Google some after Pratt confessed he hadn’t even heard of it. Once she explained what it was, he seemed to be onboard.

“I have to say I agree,” he said about the idea of him hooking up with the other Avengers. “It sounds pretty fun.”

You can watch the rest of Jefferson’s interview with Pratt below.