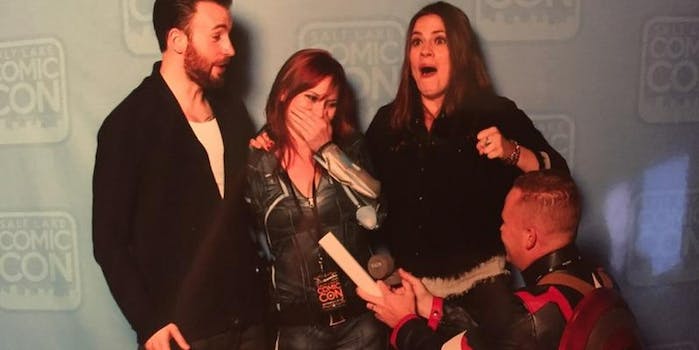 This touching moment is absolutely Marvel-ous.

Black Widow cosplayer Kelsey Jenkins went up to take a photo with Atwell and Evans and was surprised by her boyfriend dropping down on one knee to propose halfway through the photo op.

You can tell from the photos that Atwell and Evans were adorably excited as well. Atwell later tweeted about the heartwarming moment.

Even better, Jenkins’ fiance was dressed as Captain America for the proposal photos. This is true geek love.

@HayleyAtwell @ChrisEvans thank you so much for being there. It was such a shock! You both are awesome! #iAmEngaged pic.twitter.com/23CGf6dCum

@HayleyAtwell @ChrisEvans Because the first was so loved, here are the rest #SLCC15 #soinlove pic.twitter.com/kV3mLOj2XN