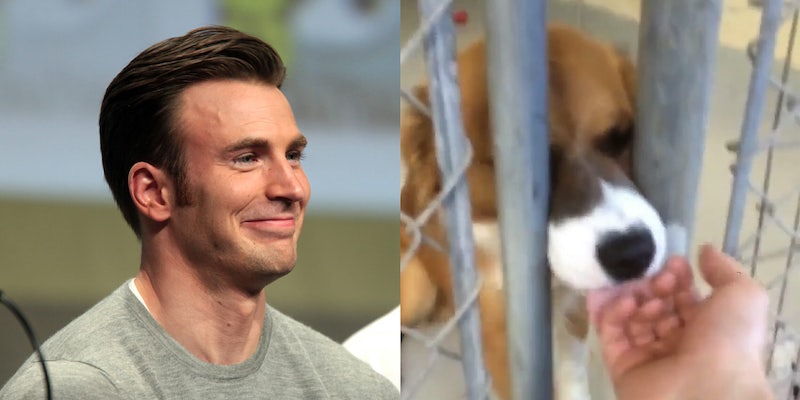 It was love at first sight.

People are celebrating National Pet Day with plenty of adorable and poignant tributes to their furry (or feathery or scaly) loved ones, and Chris Evans is no exception. This morning he shared a look at the first time he met his dog.

Evans’ love for his dog, Dodger, is well-documented, particularly when they’re separated for months at a time due to Evans’ filming schedule. But for National Pet Day, Evans dug deep into his arsenal of adorable Dodger photos and videos to pull up a clip he filmed from the first time the two met at a pet shelter. While it may take time for some owners to decide which pet they want to take to their forever home, Evans knew instantly that Dodger was the dog for him. (He also encouraged others to adopt rescue dogs.)

This is the moment we met. He was trying so hard to stay seated even though he desperately wanted to get out. I knew right away that he was coming home with me, so I took this video to always remember our first hello. Rescue dogs are the best dogs!! #NationalPetDay pic.twitter.com/XjWxPWGDPu

Dodger is much younger in this video than we’re used to seeing him on Evans’ social media feeds, but some of his spunk is still evident. He’s friendly and curious, but from the get-go, all he wants to do is get out of the cage and into Evans’ arms. He even attempts to stick his head through a gap in the door to say hello.

Man….my dog's energy level in the morning puts me in the greatest mood. He's a beautiful, fresh, new soul so happy to be alive.

And apart from Evans’ filming schedule keeping them thousands of miles away from each other, the two have been nearly inseparable ever since. Amid sharing promotion for his next film and getting political on Twitter, you can be sure to find some really great gems and glimpses of Dodger and his human on Evans’ feed.

'Excuse me, are u busy? Could I interest u in chasing squirrels with me outside? Or perhaps u could toss the frisbee? I have no plans today' pic.twitter.com/zj4AOfnFHJ

This is Dodger’s stuffed lion. He loves it. He brings it everywhere. If you press it’s paw, it sings. Today, Dodger decided to join in. pic.twitter.com/CuH53VNVtF