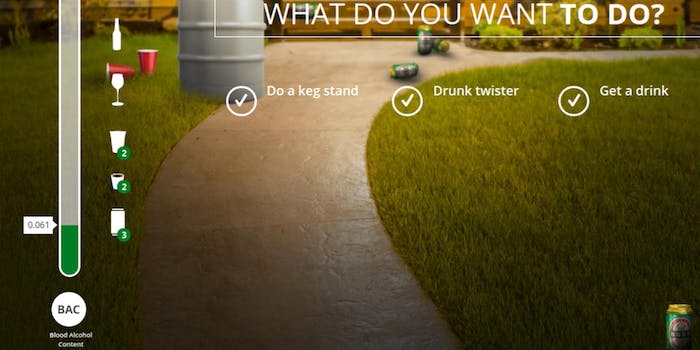 Monitoring your blood alcohol content during a simulated night on the town is FUN-damental.

Knowing how a single drink contributes to your blood alcohol content is important for avoiding things like drunk driving. It also allows you to game your BAC, by planning your drinking schedule in advance.

Change Your Story is a serious game developed by the Clarity Way Drug & Alcohol Rehab Center, to teach college students how their BAC changes over the course of an evening, based on their drinking patterns. If the questions are answered honestly, in a pattern that matches actual behavior, this game could legitimately point out an alcohol problem, which is nothing to laugh at.

That said, when the game carries a disclosure like “These BAC values are provided for entertainment use only,” it’s hard to resist having a little fun with it. 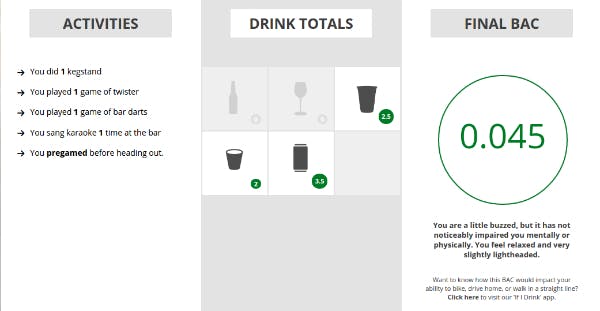 There’s some good, practical advice given out here—like alternating between alcoholic and non-alcoholic beverages while your friends drink themselves under the table. Also, best to avoid keg stands, because “Extreme consumption games and activities, such as keg stands, are the most likely type of drinking game to lead to blacking out, unplanned sexual encounters, fights, and embarrassment.”

It’s tough to argue with that.

Here’s some more good advice, doled out after you choose in “Change Your Story” to play some drunk Twister: “Be careful about the wild party photos that you share online – you’ll probably regret them later. According to one study, 1 in 10 young job seekers have lost a job opportunity or been fired for stuff they posted on social media.”

Just in case you lose track of the fact that this is not something to entirely laugh at, “Change Your Story” ends with one hell of a stinger.

If the need to find balance when you’re imbibing is what everyone takes away from this, it’s a pretty good game.