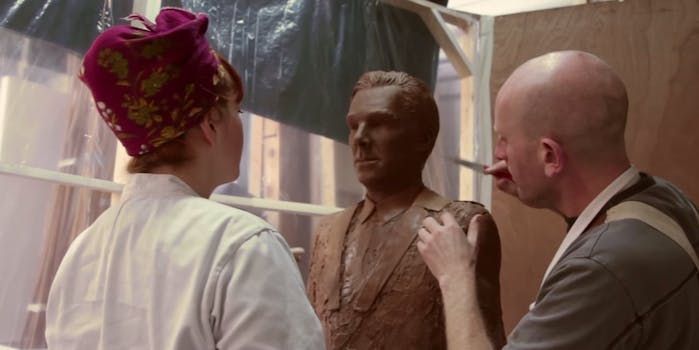 Watch a team of eight sculptors assemble this life-size Chocobatch.

It’s almost Easter, and that means it’s time for the traditional celebration of eating a ton of chocolate. Or in the case of this team of sculptors, building a life-size chocolate model of Benedict Cumberbatch.

The chocolate Cumberbatch statue was commissioned by UKTV’s new on demand drama channel, after an online poll voted Cumberbatch the tastiest star on British television. The model took a team of eight people 250 hours to build, and is either a delicious dream come true or a creepy dead-eyed chocolate mannequin, depending on who you ask.

David Tennant and Sean Bean were the second and third choices in the UKTV poll, narrowly missing Cumberbatch’s chocolatey fate.

Fans can visit Chocobatch at Westfield Stratford City in East London this Friday, although there’s no word yet on whether anyone gets to eat him.