Here’s who Chiwetel Ejiofor will play in ‘Doctor Strange’

Continuing the glorious Hollywood tradition of heralding black actors during awards season and then promptly relegating them to playing secondary characters against white dudes, Marvel has officially cast Chiwetel Ejiofor as the villain Baron Mordo in Doctor Strange.

Deadline has learned that the Oscar-nominated actor will be playing a kind of ur-Mordo, a complex character who is an “amalgamation” of various characters from the Doctor Strange canon. The original Mordo, created by Stan Lee, first appeared in 1963’s Strange Tales and quickly established himself as Strange’s most powerful foe. 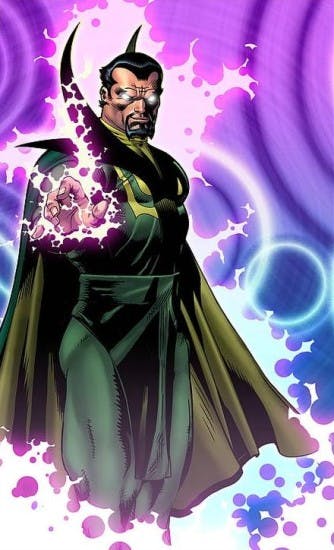 If director Scott Derrickson and scriptwriter Jon Spaihts stick to Bardo’s original origin story, then the plot should shape up to be your typical “spiritual master teaches two students who later battle each other” trope. Bardo and Strange were both students of Tilda Swinton’s character the Ancient One. That role originally belonged to a male Tibetan mystic, so while it looks like Marvel is incorporating the Strange Lives storyline into the film, the racebent and genderbent casting, script rewrites, and description of Ejiofor’s character as a hodgepodge of different characters mean that all bets are off.

Every casting decision announced for Doctor Strange thus far has incurred backlash because of the diversity issue, and while the news has mostly been greeted positively from fans, this round is no exception. As Tumblr user spikeghost put it, “lol @ marvel trying to make us forget the whitewashing [of Swinton’s role] in Doctor Strange by casting Chiwetel Ejiofor in a secondary role.”

“What little progress marvel is making on diversity in comics is getting overshadowed by the casting fuckery in their films,” wrote lonespektr.

“So the POC characters have to be white,” tatzelwyrm wrote, “but the villans can be black?”  She added, “Marvel are doing everything they can to ensure I won’t enjoy the Doctor Strange movie. At this rate I might not even watch it.”

Still, plenty of people were happy to see that an iconic villain like Baron Mordo, who packs an awful lot of sorcery into a truly flamboyant supervillain aesthetic, would be played by an actor as talented as Ejiofor. And for some, like Tumblr user fuckyeahmelancholy, this, too, was about equal opportunity:

[I]n all fairness, it’s about time we had an irredeemable asshole villain that was a minority. That’s fair, right? We have charming, lovable black heroes–where are the vile, ruthless black villains?

One could argue that history is full of them, but odds are that Marvel’s eager fans won’t be thinking about equal representation when they’re watching Ejiofor and Benedict Cumberbatch shoot lightning bolts at each other.