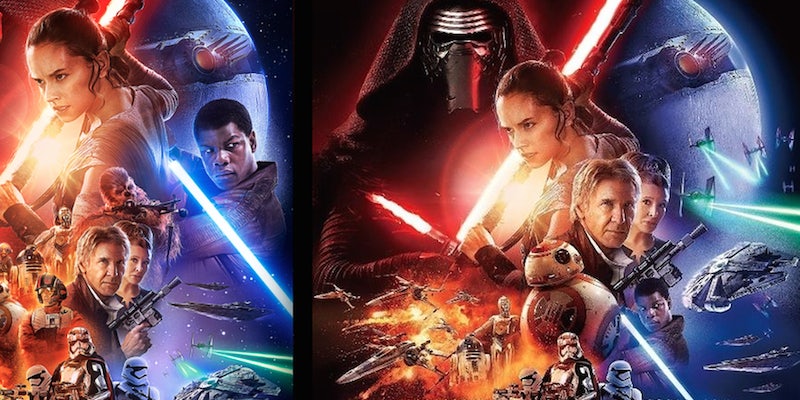 Something is terribly wrong with this Chinese poster for ‘Star Wars: The Force Awakens’

It took fans to point it out.

There’s a major change in the new new Chinese poster for The Force Awakens—and you won’t like it.

It’s been a year since leaked emails as part of the Sony hack revealed an unnamed producer discussing the belief inside Hollywood that international audiences are racist. But if the new Chinese Star Wars poster is any indication, that belief has not only stuck around, it’s influenced how Disney is promoting the franchise in Asia.

Yeesh. Your eyes aren’t lying to you, and this isn’t a cruel Photoshop hoax: that’s the real poster, in which headlining star John Boyega has been notably cropped out of his original position and reduced to the size of a thumbnail. Apparently, judging by their respective sizes on the poster, Disney’s promotional team thinks Chinese Star Wars fans will be more interested in teensy droid BB8 than in Boyega’s character Finn.

Though the Chinese poster first surfaced a few days ago, most of the mainstream media outlets, as well as smaller fandom sites, missed the obvious. Twitter had no shortage of fans pointing out the issue, though. The hit comes just after fans criticized Entertainment Weekly yesterday for demoting Black Panther in its feature on Marvel superheroes.

Given that The Force Awakens is already breaking sales records, it seems doubtful that keeping Boyega’s prominent position on the Chinese poster would have made a substantial dent in the film’s box office. It looks like not even the biggest film in the galaxy can overcome Hollywood’s paranoia about casting minorities in lead roles.