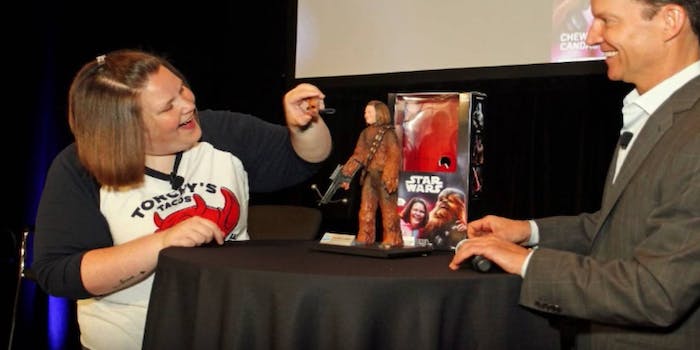 Hasbro rolls out the red carpet for Chewbacca Mom.

Who knew that a four minute video would produce such enduring fame for Candace Payne? The woman better known as Chewbacca Mom continues to rake in gifts a month after video of her laughing at a Chewbacca mask went viral in May.

Her family’s received college scholarships, an all expenses paid Disney vacation, and tons of Chewbacca masks. She’s even been able to meet the man behind the iconic Star Wars character, Peter Mayhew.

The latest bit of swag Payne and her family received came from Hasbro. The company pulled out all the stops to show their appreciation for Payne’s uncanny ability to make money for large brands shilling toys.

Thrilled to have Candace Payne & her family here to visit us at #Hasbro HQ! #ChewbaccaMom #HasbroStarWars pic.twitter.com/GDI9GMSa6F

Thanks SO much, HASBRO. You literally rolled out the red carpet for me and my family. Thanks for making play so much fun!

Payne’s reward was her very own action figure. No one’s quite sure what actions it performs (laughing?) but one thing is clear: this toy is not for sale.

The Chewbacca Mom action figure is one-of-a-kind and, much like her viral fame, it’s all Payne’s to enjoy.