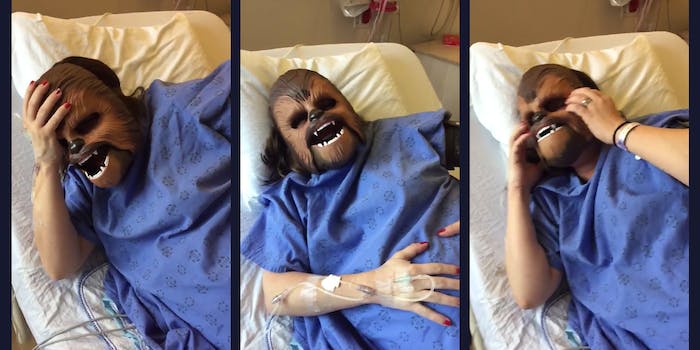 Chewbacca mask returns after woman wears one during labor

She got the mask for Christmas.

Candace Payne—also known as Chewbacca Mom—took the internet by storm last year after unboxing and testing out a Chewbacca mask, and that mask has reemerged in time for a major life event.

On Jan. 2, Katie Stricker Curtis shared a video on Facebook of herself wearing the Chewbacca mask and making it roar while she was in a hospital bed. According to Curtis, the video was filmed while she was in labor, and she eventually gave birth to a baby boy named Jayden.

“Just because I’m about to be a mom doesn’t mean I have to grow up!” she wrote along with a message about not taking life too seriously.

We know one Wookiee who would approve.