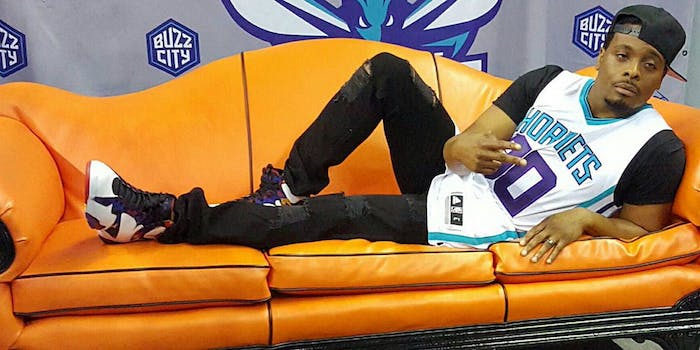 Unfortunately, Kenan did not join Kel as the evening's MC.

Because we’ve reached the point in time and space where people are nostalgic for the 1990s and all the plaid, Blockbuster stores, and hair scrunchies that decade had to offer, the Charlotte Hornets’ promotion team put together an impressive 1990s Nickelodeon night that featured Kel (Mitchell) as the host and plenty of green slime.

In between the Hornets’ 126-92 victory vs. the Phoenix Suns, there was Kid N Play dancing, appearances by the Rugrats, and at least one pair of Zubaz pants. And best of all, a Double Dare obstacle course that would have made Marc Summers the happiest man in the world.

Onward to the nostalgia!

Meanwhile, the Hornets official Twitter account continually tweeted Nick GIFs whenever something went right for Charlotte (which was pretty much all night).

But the highlight of the evening (unless you had money on the Hornets winning big) was the halftime competition. Because it can’t be a ’90s Nickelodeon night without a shot of Double Dare.

The ’90s nostalgia night obviously turned out to be all that (and a bag of chips), though personally, I would have appreciated a 1980s Nickelodeon remembrance instead. But as most of us pre-millennials now realize, you can’t really do that on television.