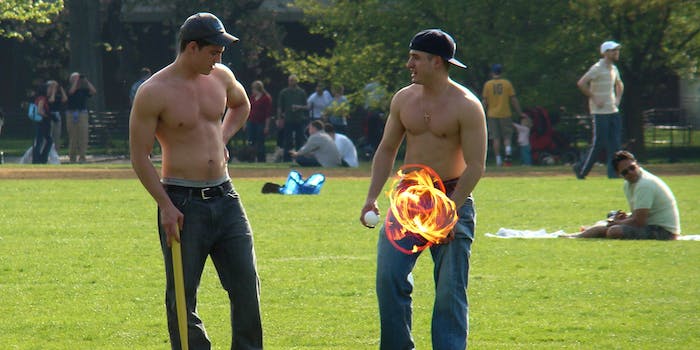 How fast would you have to swing your penis for it to catch fire?

A totally scientific answer to a theoretical penis question.

Someone on Facebook posed a simple question last week: “How fast do you have to swing your dick for it to catch fire?” 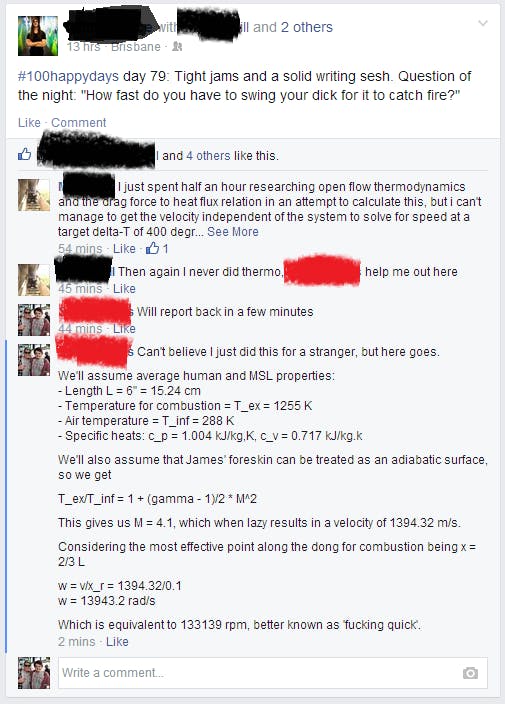 The math looks decent, but as some people on an accompanying Reddit thread pointed out, the penis would probably be torn from the body before catching on fire. Another issue is the average penis length. In this case, the original poster assumed a somewhat larger-than-average erect penis length (6 inches) when really the average male erect penis length is closer to just over 5 inches.

Here at the Daily Dot, we value rigorous, accurate reporting and thought it best to ask a couple experts. You know, for science. We found two physicists with the brains to match their senses of humor who obliged our query.

The first—who reasonably requested we only call him by his first name and last initial—said the Facebook poster way overestimated the rotations per minute (rpm). Alex R.’s calculations led him to a conclusion of about 76,666 rpm or about mach 3.5 speed. Mach 3.5, by the way, is far beyond the speed of sound. In other words fast enough to break the sound barrier and possibly create a sonic boom.

According to Alex R., there are several factors to consider for this calculation. He used the temperature a human body needs to reach in order to be cremated, about 1,600 degrees Fahrenheit.

“The other question I have is whether or not the dick would maintain the requisite shape to achieve that velocity,” Alex R. told the Daily Dot. “You’re going to get some bending because of the drag force on the tip.”

He also said that the air moving around the penis would be traveling at different speeds along the shaft: slower at the base and faster at the tip. That would also create a change in the amount of friction along the shaft, leading to the ignition, likely starting at the tip.

“Anything that comes out of a calculation should not be regarded as some kind of magic threshold. It’s got to be a minimum threshold that has to be maintained for some time before sparks start to fly and magic happens.”

The Daily Dot also corresponded with another physicist who came to a slightly different conclusion. This physicist also asked to remain anonymous.

“The wiener would need to hit about 90,000 RPMs to achieve mach 4 at the tip (needed for ignition),” he wrote in a Twitter correspondence.

But at 150-200 rpm, the force would exceed the tensile strength of the penis, causing it to be violently ripped from the body.

So we probably won’t see the Mythbusters tackling this one anytime soon.