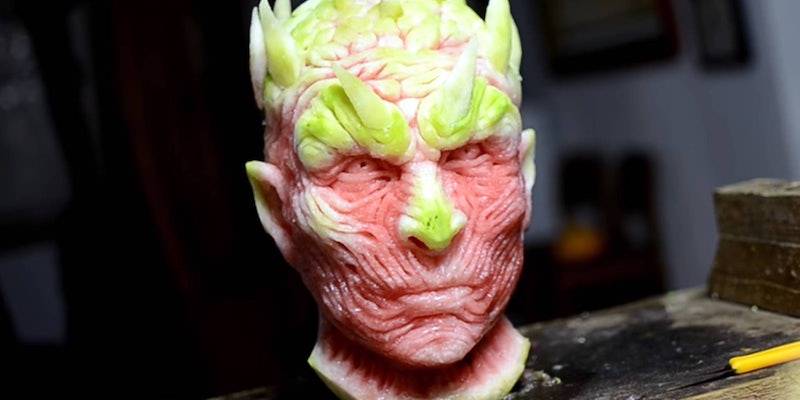 If you have ever dreamed of staring face to face with a White Walker and surviving, now is your chance.

Valeriano Fatica, an Italian artist, carved the face of the Night’s King from the HBO series Game of Thrones onto a watermelon, and it is insanely creepy. The project took the artist a total of 18 hours to create, and he dedicated the White Walker to his grandfather.

“Basically, I decided to sculpt the Night’s King, because I’m a great fan of the TV series Game of Thrones,” Fatica told the Daily Dot. “In the recent past, I’ve been dealing with another sculpture, also taken from the same TV series: the White Walker.”

Fatica specializes in carving faces into watermelons, pumpkins, potatoes, and other fruits and vegetables. Each project is uploaded to his own YouTube channel Valeriano Fatica-Fruit Carver-Ortolano Production, and he includes a little story behind each juicy masterpiece.

Finding his passion for sculptures in 2011, Fatica began to carve watermelons for buffets at his family’s restaurant, La Roccia, in Italy.

Fatica carves anything from Darth Vader and creepy reptiles to a jolly Santa Claus.  The only question lingering: Are they are still edible?