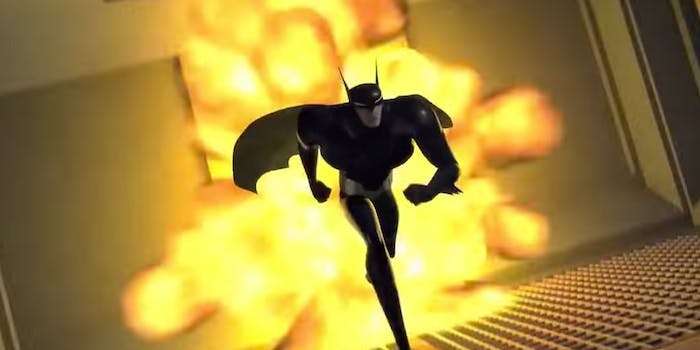 If Cartoon Network was extending an olive branch to Batman fans, it didn't work.

Cartoon Network hasn’t been in the best graces of DC Comics and their fans, but it seems the network plans to bring back Beware the Batman.

Beware the Batman, a show that was in development for two years and cancelled after just 11 episodes, will be coming back to Cartoon Network to finish off the remainder of its first season. The final episodes will air during the network’s late-night Toonami block at 3 am starting May 10.

Fans, however, are finding the graveyard timeslot insulting, paying little respect to the character and the hard work of the creators. If Cartoon Network intended the move to be an olive branch to fans who wanted to finish the season, it’s mending any wounds.

Beware the Batman is returning with new episodes to finish off what they made. Problem? It’s premiering at 3 am. Yeah they can go to hell.

Beware the Batman, a 3D animated show failed to win a broad audience perhaps due in part to its odd art style, but it quickly gained the acclaim of fans. Basing its stories on Grant Morrison’s monumental Batman run, its plots mix both realism and science fiction. Fans were excited to see their favorite hero being shown very closely to the original comics, and not being watered down with shameless pandering toward a younger audience.

Of those shows, three have been cancelled, failing to make it past two seasons. Young Justice, in particular, was halted at a critical moment in the story line, angering fans and critics alike. The show was hailed for incorporating mature story arcs and themes while boasting a fluid and clean art style. Upon its cancellation, fans tried to get a petition started to change the minds of Cartoon Network’s executives, but was met with little promise.

Young Justice, they’ve never should have cancelled it 😫

On Kevin Smith’s podcast, Fat Man on Batman, comics writer Paul Dini said he believes the networks focus on two things: ratings and toy sales. The target audience in prime Saturday morning slots mainly consist of young boys between the ages of 6 and 11. At the moment, it seems they want to see shows that are funny and random, not dark and gritty, like the acclaimed Batman the Animated Series, which struggled to find an audience during the Saturday morning time block. Shows such as the new Teen Titans, which focuses on a group of friends eating pizza and enjoying wacky high jinks, garner the best ratings. And often, high ratings translates into strong toy sales.

That means fans may have to start looking elsewhere to get their DC animated fix. Right now options for new material include direct-to-DVD movies, but there are hopes that Hulu or Netflix may fund an animated DC show on their own.