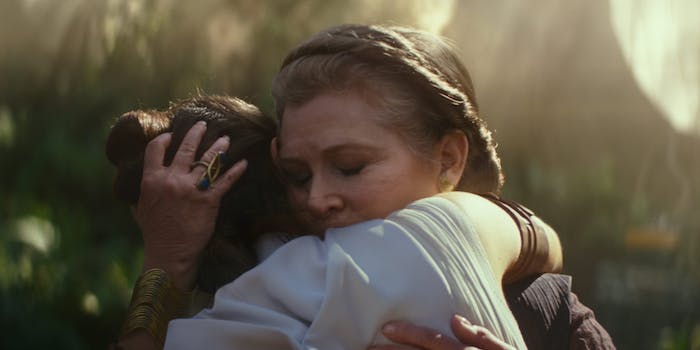 'She was going to be the big payoff in the final film.'

Lucasfilm and Disney have mostly stayed mum about what kind of role Carrie Fisher’s Leia, who will appear via unused footage from The Force Awakens, will play in Star Wars: The Rise of Skywalker. But now we’re hearing a little more about how that came to be and what might have been.

We might not ever learn what the original plan for Leia prior to Fisher’s death in 2016 would’ve been, although Lucasfilm president Kathleen Kennedy was open about how Episode IX was supposed to have been Fisher’s movie. But according to her brother Todd Fisher, it would’ve involved Leia (who is Force-sensitive like her brother Luke) finally having a big Jedi moment of her own after tapping into the Force in The Last Jedi—and yes, she would’ve gotten a lightsaber.

“They grabbed every frame and analyzed it… and then reverse-engineered it and [got] it into the story the right way,” he added. “It’s kind of magical.”

In an essay for Time magazine published on Thursday, Fisher’s daughter Billie Lourd, who appears in the sequel trilogy as Lieutenant Connix, also mentioned the unused footage that Abrams had of Fisher and the meeting Lourd had with Abrams when deciding how to handle Leia’s role in the new film.

“We both agreed she was too important to be written off in the classic Star Wars introductory scroll,” she said. “This last movie was supposed to be Leia’s movie, and we wanted it to remain that, as much as possible. What I hadn’t known–and what J.J. told me that day–was that there was footage of my mom that they had collected over the years that hadn’t made it into the movies, footage that J.J. told me would be enough to write an entire movie around. It was like she had left us a gift that would allow Leia’s story to be completed. I was speechless.”

As for the exact role that Leia will play in The Rise of Skywalker? It’s still unclear, and we’ve seen very little of that footage so far. But if there is any indication from her family, Leia is in good hands.