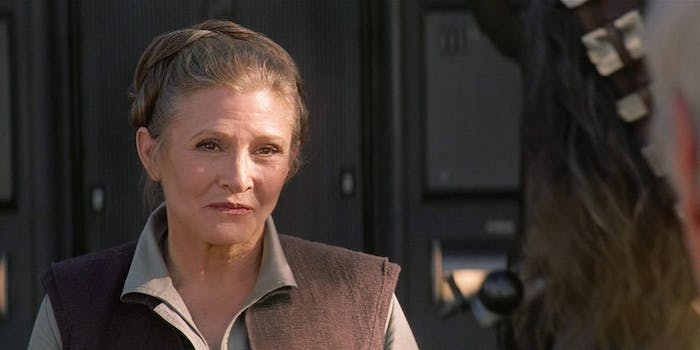 We'll get to see Leia one last time.

Carrie Fisher’s death has shocked the world, but before she passed she left us with one final, bittersweet performance from her most famous character.

According to a new report from Deadline, Fisher finished filming her role in Star Wars: Episode VIII, and sources close to the production have said that Leia “had a larger role” in the film.

Fisher’s appearance as General Leia Organa in Episode VIII isn’t a surprise. She, Mark Hamill, and Harrison Ford all reprised their roles from the original Star Wars trilogy in The Force Awakens, and as the face of the Resistance, Leia had a formidable presence among the new characters and old favorites alike—and Episode VIII seemed to poised to expand it, particularly in the wake of one of The Force Awakens’ most heart-wrenching moments.

In the wake of a recent New York Times interview that was published shortly before the announcement of Fisher’s death, some fans are concerned that Lucasfilm may use the CGI technology that brought Peter Cushing back to life in Rogue One to resurrect an older Fisher for future Star Wars installments; a younger, CGI version of Fisher’s Leia makes a cameo in the film.

However, John Knoll, the chief creative officer at Industrial Light & Magic and a Rogue One visual effects supervisor credited with creating the story for Rogue One, addressed the criticism that Cushing’s appearance would open to door to other deceased actors being resurrected digitally in film and called the process “extremely labor-intensive and expensive.”

“I don’t imagine that happening,” Knoll told the New York Times Tuesday. “This was done for very solid and defendable story reasons. This is a character that is very important to telling this kind of story.”