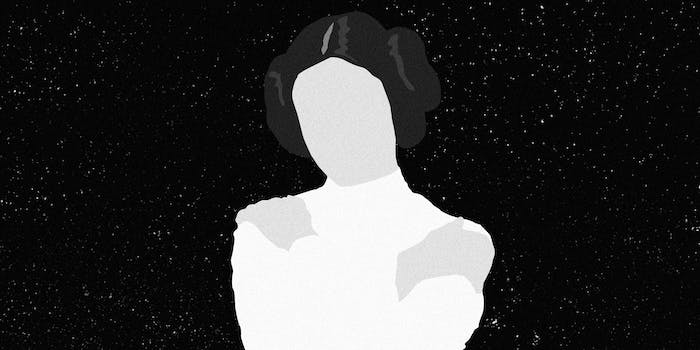 They created art to honor her role in 'Star Wars.'

The world is in mourning after learning of Carrie Fisher’s death Tuesday at age 60, and everyone from Fisher’s Hollywood colleagues to her service dog Gary are sharing their condolences and memories. And many fans are tapping into Fisher’s most famous role to honor a fallen princess and general.

As Leia Organa, Fisher portrayed one of science fiction’s first female leads, a smart and capable Rebel and Resistance leader who could hold her own among the best of men, even when she was the only woman in the room. She made you root for her, and in her role in the original Star Wars trilogy and The Force Awakens she inspired generations of fans—particularly young girls and women.

After hearing of Fisher’s passing, some Star Wars fans started to share photos of themselves and their daughters to show just how much Fisher and Leia touched their lives.

In honor of Carrie post pics of you or your feisty daughters dressed up like Princess Leia. I want to see em all. I'll start. #CarrieFisher pic.twitter.com/1u63OHRWir

Digging up this photo of me, dressed like my favorite movie character, in memory of Carrie Fisher. Sad to hear this news. #RIPCarrieFisher pic.twitter.com/BI4ggxuWqR

Princess Leia had such a huge impact on me as a child. She was the first female character I looked up to, and always will. #RIPCarrieFisher pic.twitter.com/jNBu5EfPw6

My kids were brought up w plenty of Leia in their lives (like our reenactment at a SW exhibit). I'm sad but happy for her legacy #RIPCarrie pic.twitter.com/olNnihvAFt

My daughter was not into Disney Princesses or anything like that. But she did and does love Princess Leia. Her Princess Leia hair when young pic.twitter.com/V98Ikt4WyK

The fanart dedicated to Fisher started to pour in as fans channeled their grief. GIFs and drawings shared across Twitter and Tumblr to thank her for the life lessons she gave us as Leia and later as herself.

Thanks, @carrieffisher for teaching me that girls like us can be princesses, generals, or whatever we want to be. #RIPCarrie pic.twitter.com/VHuKIW5ymV

A couple pieces of fanart tied together Fisher’s death with David Bowie, who died at the beginning of the year to link one Rebel to another.

The beginning and ending of 2016 in one picture. pic.twitter.com/BHMo95oA2Z

May the Force be with her.