Captain Toad: Treasure Tracker will be your favorite new Wii U game

Captain Toad: Treasure Tracker exemplifies everything that makes a Nintendo game special, and why the Wii U is a worthy platform.

Toad is the little mushroom-headed fellow who repeatedly told Mario that the Princess was in another castle, in the original Super Mario Bros. on the Nintendo Entertainment System in 1985. Toad has since become a mainstay in the Mario universe, in some cases as part of the landscape, and in other cases as a playable character. He’s the main attraction in Captain Toad: Treasure Tracker, a puzzle game whose “adorable” setting is stuck at 11.

Each course or stage of Captain Toad: Treasure Tracker is a little world floating in mid-air, and the goal is to find a Star at the end of the course. There are enemies to navigate through, switches to pull and gears to turn, and parts of the environment that can moved around wholesale. There are also three Super Gems per stage to collect, and forward progression through the game sometimes requires a minimum number of total collected Super Gems. 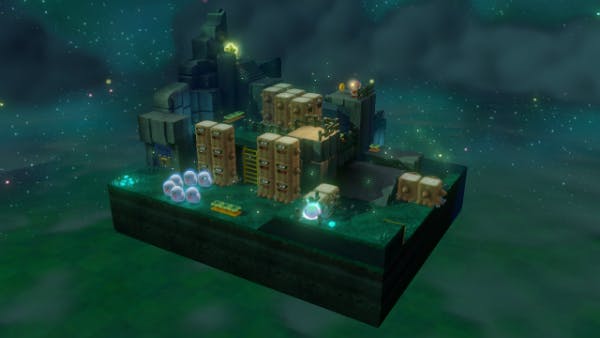 You fight Koopas and Bullet Bills and Shy Guys. You pull up tufts of grass to reveal coins, and squash bad guys by jumping on their heads or throwing radishes at them. You collect green 1UP mushrooms. There are levels themed to the Luigi’s mansion series. Some of the music is lifted wholesale from previous Mario games (“That’s the theme song to the Toad bonus houses in Super Mario 3!” I said to my wife at one point). Nintendo couldn’t have made this game any more cozy and familiar to Mario fans.

The cute presentation of Captain Toad: Treasure Tracker belies some genuinely challenging puzzles. The player can freely rotate each course so as to investigate their layouts. Three-dimensional thinking is a requisite skill to complete the courses, and especially to grab all the Super Gems. Toad can neither run nor jump, so thinking your plan through before taking action is also an absolute necessity, especially when a ton of enemies are in constant motion. 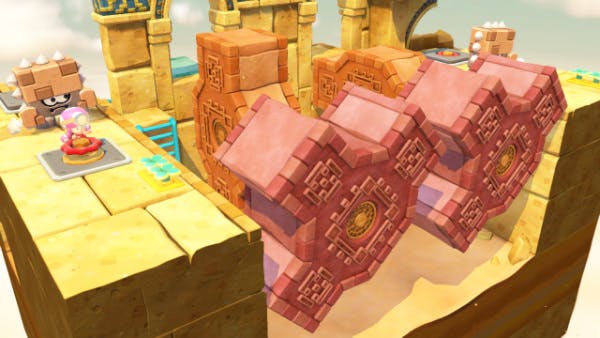 The courses collectively host wonderful demonstrations of what the Wii U is capable of, to the point where Captain Toad: Treasure Tracker functions like a conversation piece to show off the value of the Wii U to people unfamiliar with the platform. Touching enemies on the GamePad freezes them, to help get Toad through tight spots. There are movable elements within puzzles—like blocks the player can slide around or chains they can pull—that the player manipulates via the GamePad. In one of the coolest demonstrations of what the GamePad can do, there are also grates Toad can stand on that get pushed around via the wind. The player provides the breeze by actually blowing on the GamePad’s microphones.

The heavy use of the GamePad can cut both ways, however. I found it disorienting to switch my attention from my television down to the GamePad and back up to the television, sometimes at a rapid pace and multiple times during courses, to the point where I felt almost motion sick a few times.

The other, recurring issue I had with Captain Toad: Treasure Tracker was the camera. It only has two modes, zoomed all the way out, or zoomed in really close. The former is the default, and gives an overhead view of the courses. The latter comes in handy for negotiating precision moves. A variable zoom, rather than being stuck with two default positions, would have made some of the courses much easier to negotiate.

I was a little annoyed at the storyline for the first episode of Treasure Tracker, in which Captain Toad has to rescue Toadette. But then Nintendo flips the script at the end of the first episode’s courses by making Captain Toad the abductee, and now Toadette is the hero on the rescue mission in episode 2. And her initial courses are so much more difficult than Toad’s early challenges. This role-exchanging surprise cemented my feelings on how fond I was of Captain Toad: Treasure Tracker. 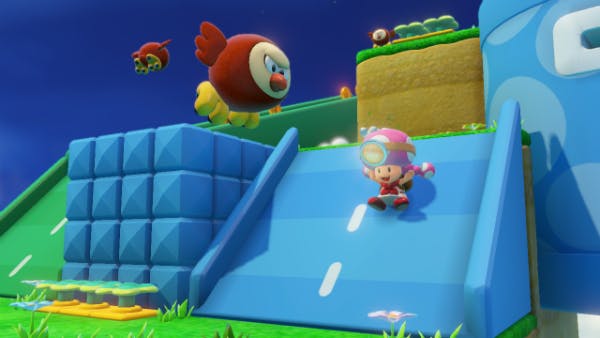 What I find just as interesting about the game is the definitive statement it makes about precisely where Nintendo lies in this industry. Treasure Tracker makes great use of the Wii U hardware, and innovative hardware design is a bulwark of Nintendo’s current appeal as a game company.

Treasure Tracker also depends almost entirely on nostalgia and familiarity with the Mario franchise to weave its appeal and make this game a potential selling point of the Wii U hardware. Nintendo is locked into a Moebius loop that on one hand limits its potential audience. On the other hand, Nintendo’s consistency of family-safe, high-craft game design and stable of lovable characters is what makes gamers introduce the brand to their children in the first place, which feeds said loop.

For existing fans, Captain Toad: Treasure Tracker checks all the boxes as to why they love Nintendo. For the kids this game might be gifted to for Christmas, Treasure Tracker provides an adorable demonstration of what Nintendo is all about. And for that, I think this is one of the strongest titles Nintendo has released in 2014. It’s a must-have for Wii U owners.

Disclosure: Our review copy of Captain Toad: Treasure Tracker was provided by Nintendo

All images via Nintendo