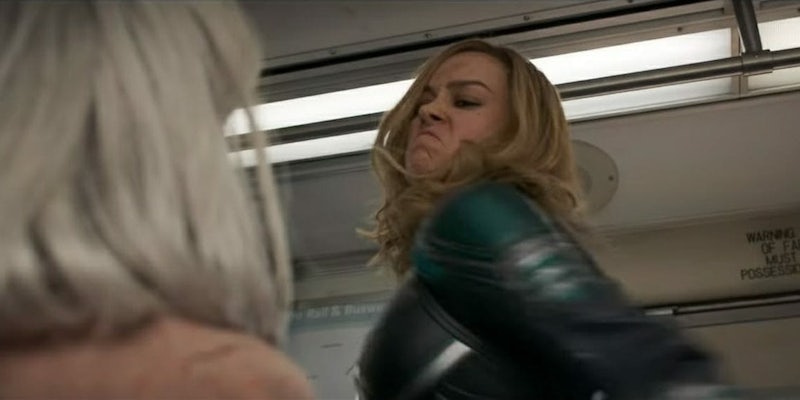 Why did Captain Marvel punch an old lady in the face?

Your reaction depends a lot on how well you know the comics.

For a lot of viewers, this was a puzzling scene. A superhero punching a charming old grandma seems more appropriate for the gritty tone of the DC franchise, not the MCU. But that punch definitely happened, and your interpretation depends on how well you know the comics.

While the trailer doesn’t come out and directly confirm it, that lady is almost certainly a Skrull—a shapeshifting alien invader disguised as a human. The scene appears right after a shot of some Skrulls in their natural, green-skinned form, and the voiceover is talking about them at the time. So: probably a Skrull.

Read more: Who are the Skrulls in Captain Marvel?

However, Marvel comics readers make up a pretty small fraction of the MCU’s audience, so plenty of people were confused. (There were also plenty of people saying they’d happily let Brie Larson punch them in the face, but let’s not get into that.)

Yooo why did Captain Marvel punch that old lady like that I’m screaming pic.twitter.com/zOrAHHP2xf

That scene is simultaneously a fun Easter egg for comics fans, and new source material for one of the most annoying happenings in superhero movie fandom. Instead of just explaining to newcomers what a Skrull is, you’ll find dozens of people making fun of MCU fans who don’t understand what’s going on. Just a reminder: It’s not a personal failing to watch the movies without reading the comics. It’s silly and elitist to mock people for not knowing the nerdy minutiae of Marvel canon, especially when movies like Captain Marvel introduce those comics to a wider audience. You’d better believe that Marvel will sell a ton of Secret Invasion Skrull comics before the movie comes out next year.

“She told Carol that she would have a better time finding a man if she dressed more feminine,” she wrote.

Of course, we’ll all be laughing on the other side of our faces if the movie comes out and reveals that this really is a harmless old lady, and Captain Marvel just mistook her for a Skrull. We’ll know the truth on March 8.