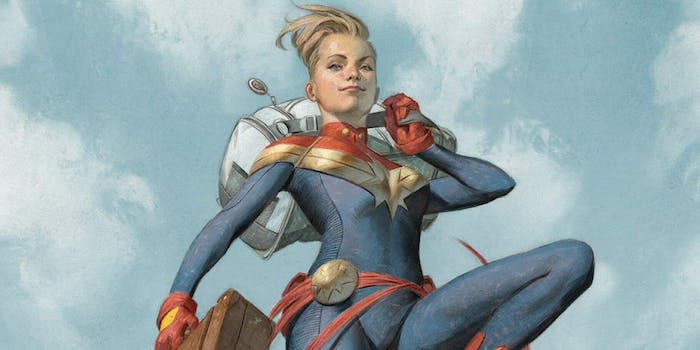 The Life of Captain Marvel #/Marvel

We all missed this ‘Captain Marvel’ Easter egg in ‘Avengers: Infinity War’

It was hiding in plain sight.

Now that Avengers: Infinity War is out on home release, fans are starting to pick up on a ton of new details. Among them is this easily missed Captain Marvel Easter egg, hinting at Carol Danvers’ role before her more obvious moment in the post-credits scene.

Over the past few days, several people have noticed that Cull Obsidian—aka Black Dwarf, a member of Thanos‘ Black Order—seems to be wearing a piece of Captain Marvel’s costume. You can see a red, blue and gold piece of fabric hanging from his belt, possibly as a trophy from a previous battle.

This likely escaped people’s notice the first time around because, in promotional images and merchandise, the scarf either isn’t visible or has a different color scheme. We wouldn’t be surprised if the Captain Marvel colors were added in post-production, avoiding the Easter egg showing up on Cull Obsidian toys and causing further speculation about a Carol Danvers cameo.

To jog your memory, here’s Captain Marvel’s most famous costume, featuring a scarf around her waist:

This all suggests that Captain Marvel has already clashed with Thanos and the Black Order, which makes sense given the timeline.

The Captain Marvel solo movie—due out next March—primarily takes place in the 1990s. While the character begins as an Air Force pilot, her newfound superpowers take her on spacefaring adventures, and the movie will use material from the Kree-Skrull war storyline in the comics: an epic battle between two alien races who make their way to Earth.

By the time of Avengers: Infinity War, Captain Marvel is somewhere in space, and she’s been there for a while. That gives her plenty of time to clash with the Black Order, possibly being defeated in battle by Cull Obsidian. She’s also expected to be the same age in 2019 as she was in the ’90s, which poses some interesting questions for her timeline. Does she get frozen for decades, like Captain America? Does she travel through time? That scarf on Cull Obsidian’s belt looks pretty fresh, so it probably hasn’t been hanging there since the ’90s.

Whatever the answer, we won’t be surprised if the Black Order show up in the Captain Marvel movie, leading into her role in Avengers 4.