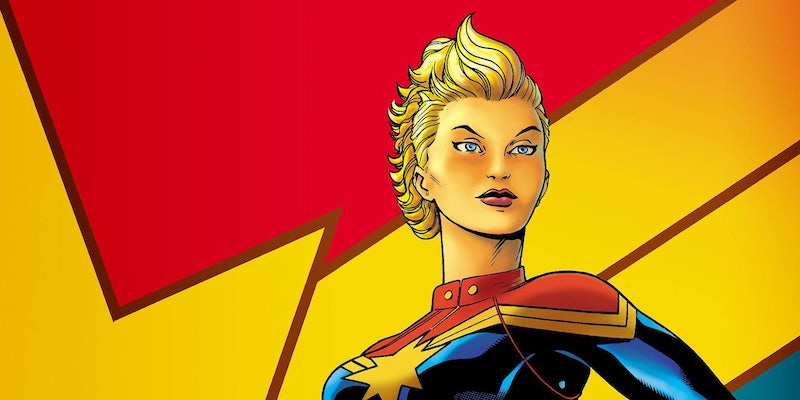 But who will play her?

Speaking at a Marvel event at the Smithsonian Institute on Friday, the Russo brothers have seemingly confirmed that Captain Marvel will appear in the two-part Avengers: Infinity War.

According to tweets from the Q&A audience, one of the Russos briefly name-checked Captain Marvel, then promptly backtracked after a fan explicitly asked, “Did you just confirm Captain Marvel?”

Pretty sure the Russos just slipped & confirmed Captain Marvel is going to appear in #AvengersInfinityWar. #marvelatsi

Captain Marvel (AKA Air Force pilot Carol Danvers) has been a contentious topic for a few years now, tying into the MCU‘s noticeable lack of a female-led franchise. Marvel confirmed in 2014 that she would receive her own solo movie, sharing an announcement with Black Panther and the Inhumans, but the role has yet to be cast.

In the 18 months since that announcement, Black Panther has made his debut in Captain America: Civil War, the Inhumans movie has been removed from the studio’s release calendar, and Captain Marvel was pushed back from July 2018 to March 2019, to make way for Ant-Man and the Wasp.

For many fans, this sequence of events felt like Captain Marvel was being put on the back burner while the studio launched more male-led franchises like Ant-Man and Doctor Strange. Once Inhumans was announced and then indefinitely pushed back, some began to wonder if Captain Marvel would suffer the same fate, quietly disappearing to make way for more sequels and crossovers.

This comment from the Russos confirms Carol Danvers’ likely introduction to the franchise, in a similar format to Black Panther and Spider-Man’s roles in Civil War.

As an ensemble storyline that incorporates characters from every corner of the MCU, Infinity War will undoubtedly involve more spacefaring scenes than the earthbound Avengers movies: A perfect opportunity to introduce Captain Marvel, a character who has plenty of outer space adventures in the comics.