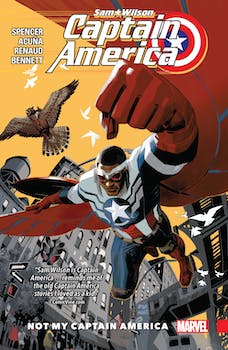 Fans aren't happy with the comic's mocking depiction of activists.

Sam Wilson (formerly known as the Falcon) assumed the Captain America title in 2015, and the two comics have been running alongside each other since the Steve Rogers relaunch last year. Both comics deal with political issues like anti-immigrant prejudice and neo-nazism, with the latest issue of Sam Wilson resulting in backlash for its depiction of social justice activists.

During a standoff between racist pundit Ariella Conner and the new Falcon, Joaquin Torres, the comic introduces a stereotypical parody of young activists: a Z-list supervillain team of college students demanding a “safe space” on campus. 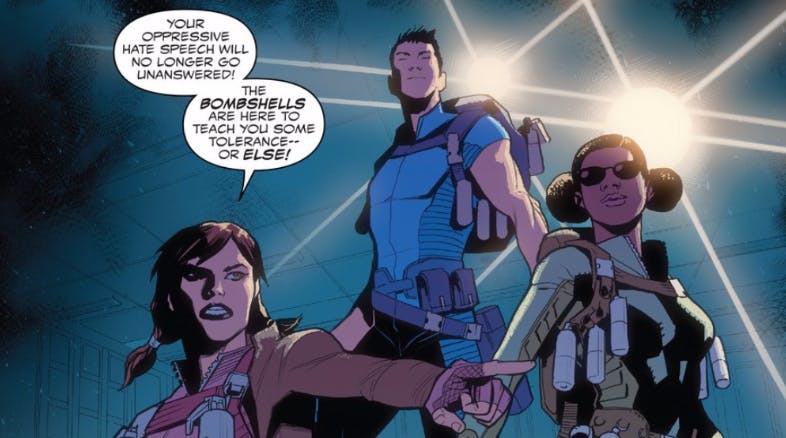 The Bombshells are meant to provide a contrast with the more measured approach of Sam Wilson and the Falcon, who also oppose Conner’s Ann Coulter-inspired values. While the Falcon decides to confront her with reasoned debate, their discussion is interrupted by the Bombshells attempting to kill her onstage.

As a superhero, the Falcon naturally decides to protect Conner from their attack—prompting the Bombshells to respond by shouting things like, “Your silent acquiescence is what empowers abusers and the culture of hate,” and, “You should be an ally, not helping to defend oppression culture!”

The subplot ends with the Bombshells being arrested (while yelling about being “mansplained” to by “Captain Patriarchy”), and Sam Wilson monologuing about the importance of compromise.

As a parody of social justice movements, the Bombshells come across as embarrassingly out-of-touch. In fact, the comic feels a lot like a Gamergate-esque punchline about “SJWs,” mocking the use of phrases like “trigger warning” and “oppression culture.” Panels from the comic quickly went viral among fans on social media, with writer Nick Spencer responding to the criticism on Twitter. (Artist Paul Renaud, who has a more neutral social media presence, rarely participates in public discussions about the comic.)

Even if we choose to follow Spencer’s interpretation of the Bombshells as a lighthearted satire, that satire isn’t very effective. In a rather preachy tone, the comic presents a judgmental divide between two versions of anti-racist activism: wholesome heroes like Sam Wilson, and laughable weirdos who use words like “patriarchy” and try to blow people up. It echoes the common misconception that social justice terminology belongs to a realm of Tumblr teens who get “outraged” as a kind of hobby, while reasonable adults provide practical solutions in the real world.

It might have been interesting to see a more thoughtful contrast between Wilson’s viewpoint and the more radical opinions voiced by the Bombshells, but instead we’re just presented with a stereotype.

While Spencer evidently sees the backlash as further proof that people can’t take a joke, this clumsy satire reinforces the idea that phrases like “trigger warning” are meaningless buzzwords. Not only is this dangerous, but it also feels out-of-character for a comic starring Sam Wilson, a veteran superhero who would surely be sensitive to the concept of PTSD triggers. In the movies, you may recall him being portrayed as a military trauma counsellor.

In a similar vein to the Hydra Captain America storyline, this comic exhibits a shallow understanding of its own impact as a political story, especially when readers are meant to take some messages seriously (“anti-immigrant rhetoric is bad”) and others as a harmless joke (“social justice terminology is for dweebs and extremists.”) It’s also a textbook example of satire punching down instead of up, with its white, male creative team making jokes at the expense of oppressed groups, before going on social media to argue with the resulting criticism.

You have to wonder why Marvel greenlit this as an appropriate storyline, especially amid the ongoing issues of racism and discrimination in comics publishing.