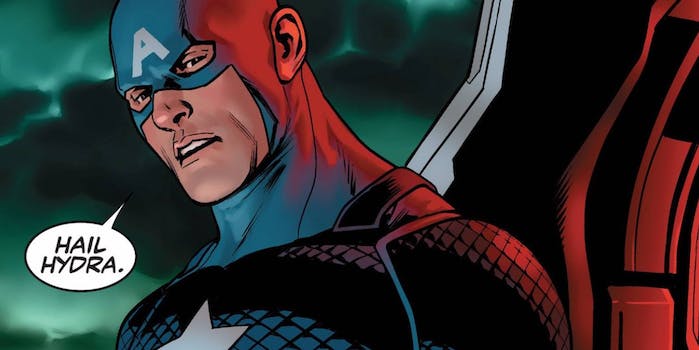 Even by the tumultuous standards of superhero fandom, the new Captain America comic has sparked an impressive amount of backlash. By revealing Steve Rogers to be a secret member of the terrorist organization HYDRA, Captain America: Steve Rogers #1 matched some of the biggest twists in comics history.

Major plot twists like this are always controversial, but HYDRA Captain America is very different from, say, the death of Superman. HYDRA is inextricably linked to Nazism, with Steve Rogers #1 featuring the Nazi supervillain Red Skull as the main antagonist. In that context, it’s easy to see why someone might object to the abrupt revelation that Steve Rogers is (apparently) an undercover HYDRA loyalist.

Amid the discussion on social media, one fan suggested a different response to the controversy: donate the price of the comic to the U.S. Holocaust Memorial Museum.

Tumblr user rockscanfly, who shared the idea for constructively protesting the comic, racked up more than 14,000 notes from other fans. The post links to an article by comics critic Jessica Plummer that recounted Steve Rogers’s origins as a hero created by two Jewish cartoonists during World War II and explained the impact of the new storyline in a world where racism and anti-Semitism are still very real problems.

There’s no way of knowing how many people have donated to the Holocaust Museum in Steve Rogers’s name, but it’s interesting to see how much backlash this comic has inspired, including among newcomers to the Captain America comics.

Thanks to the popularity of Marvel‘s films, Captain America’s audience has expanded beyond the small circle of people who read monthly comics. Last month’s two Captain America comics—which, granted, did not receive the same publicity boost as Steve Rogers #1—only sold approximately 30,000 copies each. Meanwhile the #SayNoToHydraCap hashtag received enough traction to trend on Twitter for the better part of a day, and thousands of people have reblogged a single Tumblr post about the Holocaust Museum donation protest.

Headline-grabbing plot twists always sell more comics, but in this case the burst of publicity may be a double-edged sword. A lot of new readers are unlikely to stick around to finish the series—especially if they discovered the character through the movies, which draw a direct line between HYDRA and Nazi Germany.

On the other hand, Nick Spencer, the comic’s writer, has a simpler take on all the negative attention: at least people are actually talking about the comic.